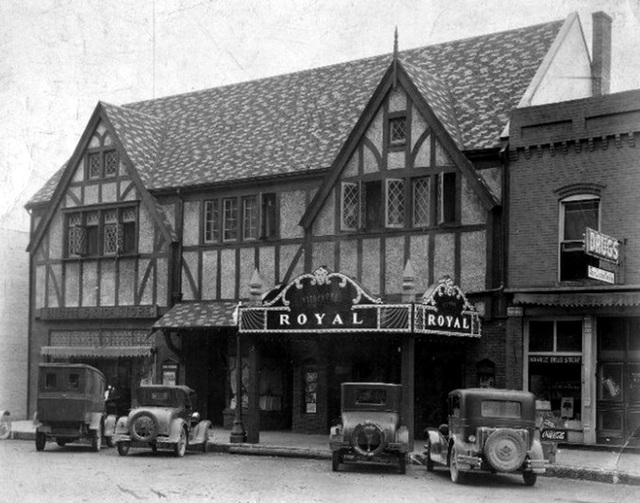 When the original Royal Theater opened in 1914, it was the first building erected in Danville specifically for showing movies. It was built for Ed Caldwell on the city’s main square.

In 1926, Thomas J. Barnett purchased the Royal Theater, as well as its two neighboring properties, which both were razed. He had the old one-story “photoplay parlor” enlarged to more than twice its original size, and had a new facade added to the front of both the old and new theater buildings, in Tudor Revival style, appropriately so, as Barnett was born in England.

The new Royal Theater opened in 1927 with Dane Nash in “Rookies”. It featured seating for over 600, a new pipe organ, a stage for live entertainment, and a new, ornate canopy marquee illuminated by lightbulbs.

The auditorium was decorated in Tudor style as well, with wooden beams across the ceiling, chandeliers on each side of the proscenium arch, and even an early form of stadium-style seating, so that every patron had a clear view of the screen.

Today, the Royal Theater has been lovingly restored to it’s 1920’s appearance, and features not only first-run films in its still single-screen auditorium, but classic film screenings, and family film series during the summer months.

The Royal Theater also hosts concerts on its stage, as well, returning to its original use as a venue for both onscreen and live entertainment.

Here is another photo:
http://tinyurl.com/zhuad