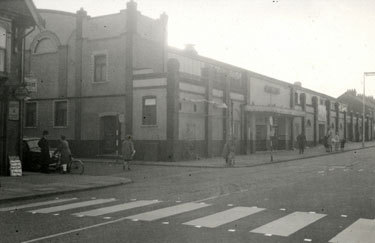 This hall opened for the worldwide craze at the time for roller rinking and was called Geisha Rink. When this began to faze out around 1910/1911 it was soon converted to a cinema and leased out to Mr Henry Newton who would later become the sole manager he named the place the Pavilion Picture House and this opened in 1913. In between films such as “Dantes Inferno” and “A Wild Rose” they would have live acts. By 1918 Mr Arthur Watson J.P. was the lessee and Mr Harry Watson been the manager. By then films were showing continuous with two changes of programme weekly. Prices of admission ranged from 4d up to 1/-.

In 1927 films were provided with Fitton and Haley orchestral organ this was a 2 Manual organ with chambers either side. In 1943 it was taken over by the Leeds based Star Cinemas chain. By the 1950’s the organ had been removed and replaced with the then latest Hammond Electronic.

By the late-1950’s admission prices rocketed and this proved to be the final nail in the coffin for this cinema which closed 1st October 1961. It was sold for development and by early-1962 it had been demolished and replaced with a block of shops known as Pavilion Row which is still there to this day.