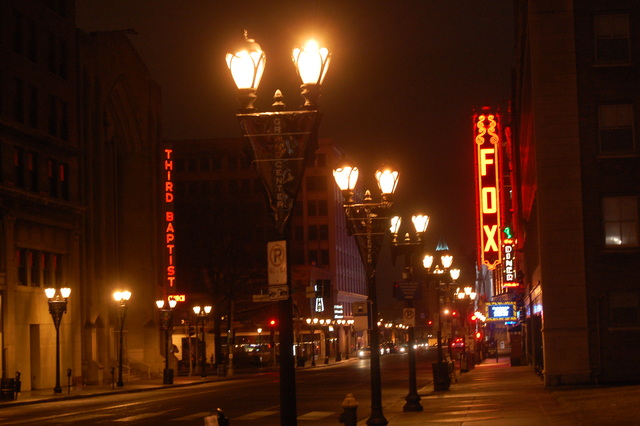 The Fox Theatre was opened on January 31, 1929 with Janet Gaynor in “Street Angel”. The St Louis Fox Theatre and its twin in Detroit were intended to be the Fox studio’s flagship Midwest theatres. Built in an exotic Siamese-Byzantine style, the St. Louis Fox Theatre alone cost nearly $5 million, at that time an outrageously huge sum for a movie theatre.

In the lobby, a pair of huge golden griffons flanked the grand staircase, and deep red faux marble columns ringed the mezzanine level. From every corner statuary peeked out—including a group of large gilt maharajahs. The cavernous auditorium was spectacular in scope, dramatic in its lighting and swirling décor, and when the Governor of Missouri appeared on its stage on opening night to dedicate it, he was nearly at a loss for words. It was equipped with a Wurlitzer 4 manual, 36 rank theatre organ which was opened by organist Betty Gould.

From the 1930’s through the 1950’s, not only did the Fox Theatre host gala movie openings, like 1957’s “The Spirit of St Louis” starring James Stewart, but was host to elaborate stage shows, and big-name entertainers, like Nat King Cole. But by the 1970’s, the theatre was reduced to screening kung fu epics to half-empty houses.

In 1981, the Fabulous Fox, not so fabulous after years of decline, was renovated in a year-long, $2 million renovation. Improvements were made to the sound and lighting systems, dressing rooms, and stage.

The St. Louis Fox Theatre is now host to concerts and Broadway shows and is more successful today than at any other time in its history.

in the 1940s It was a rare treat for my mother, younger brother Charles,and I to travel all the way “downtown” by public transportation to Grand Avenue to see the latest movies. All the way from Walnut Park where we lived was quite an excursion then. We were in awe of the grandure of the building. Once as we were walking down the ornate spiraling staircase between levels my brother tripped on the carpet and fell breaking his collar bone. It did not alter our awe of the grand building.

Only movie I saw here was ‘Hail Hail Rock n Roll’ which was interesting as it was filmed there as well. Kind of an odd experience.

A full-blown afternoon of Wurlitzer organ is scheduled for Sunday August 13th, 2017 at 2PM. As two years ago the program features Jack Moelmann, this time with Dave Wickerham and Justin LaVoie also at the console. A rare opportunity to hear the instrument in something besides the 15-minute snapshot included in some of the tours.

This will be a great show!!! I am bringing 6 people from Chicago. 2 years ago was so good. And don’t forget a Stan & Oliver film too !!

The best show ever….Col. Jack was outstanding as well as Dave Wickerham & Justin Lavole…..All terrific artists!!! A show never to be forgotten…A very good attendance too. A beautiful afternoon in a beautiful movie palace!

There is one inaccuracy in the description of the history of this still flourishing theater. During the 1960’s the Fox was still a top notch first run house playing movies like “Planet of the Apes”, “The Birds”, and “True Grit”, etc.. It wasn’t until the awful 1970’s that they resorted to kung-fu movies and so-called “blacksploitation” films. The theater closed after the theater operator, Arthur Enterprises, declared bankruptcy. It was rescued from certain oblivion by Mary Strauss and restored as a Broadway touring and concert venue in the 1980’s. The Fox is a major destination for touring shows and it’s powerful Wurlitzer is still operable. A rare survivor from the Golden Age of movie palaces.

Pleased to read that its Wurlitzer is still there and operational. They were built in North Tonawanda NY with the demonstration organ in the Riviera Theatre in NT for prospective buyers. There is a Wurlitzer in most surviving theatres in the Buffalo NY area.