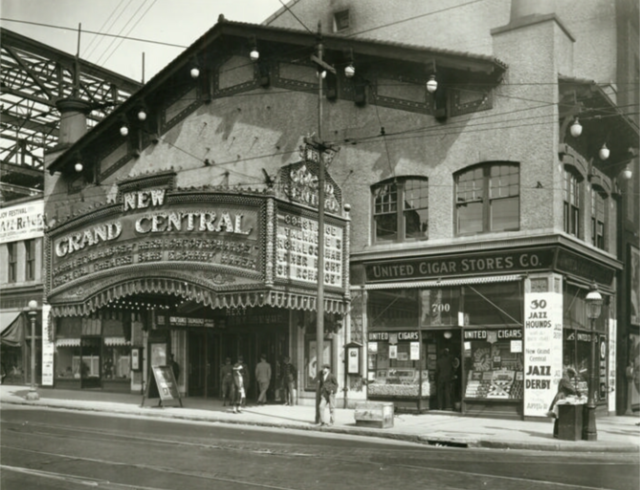 Since it was located on Grand Avenue in the center of the theater district, it seems fitting that this theater would be named the Grand Central Theatre. Built by the Skouras Brothers, the Grand Central Theatre opened on April 1, 1913, it became one of the first theaters on Grand Avenue and one of the first movie palaces. The Skouras Brothers showed much forsight and took many chances in building an $150,000, 1,750 seat theater to show only motion pictures. Before, the majority of grand theaters were vaudeville houses or legitimate playhouses.

It seemed to be the movie theatre’s destiny to be the first St. Louis theater to host the first talkie - Al Jolson in “The Jazz Singer”. It later made local history as the first to show the premiere of the all-color talking and singing musical “On With The Show” in June 1929.

Inside this movie palace was an ornate interior with gargoyles glaring at the audience, although the audience by no means felt unwelcome from the menacing faces of these plaster characters. Designed by the architectual firm of Helfensteller, Hirsch and Watson, the New Grand Central Theatre continued to bring in crowds. The Skouras Brothers built the Missouri Theatre and later the St. Louis Theatre to accommodate larger audiences. The trend on Grand Avenue was to build bigger and better theaters, each outdoing its predecessor. Thus the crowds began to migrate to the grander, larger and more lavish theaters a few doors or blocks from the New Grand Central Theatre, which closed only ten years after its remodelling.

On December 31, 1948, the New Grand Central Theatre was reportedly in a state of disrepair. It had closed 17 years earlier and had not been in use since. The stage and orchestra pit were filled with some of the 2,000 plus seats from the audutorium. The torn curtain had fallen onto the stage and across other seats piled on the stage. Outside, the marquee which once had glowed with bright lights had fallen letter by letter. The arched entrance was missing. To the left and right sides of the center opening, merchants had moved in. One side held the White Mills Service 5 cent and 10 cent Restaurant while the other advertised free parking for the Missouri, Fox and St. Louis theaters.

The Skouras Bros. took over the house in 1920. At this time the “New” was dropped from the name.

Architect was the firm of Helfensteller, Hirsch & Watson.

In 1936, Fanchon & Marco announced plans to convert the facility into an art house and rename as Guild Cinema. However, early in 1937 these plans were dropped as bids received were two times F&M’s original estimate.

The following is certainly “fuzzy” information, but it’s the kind of thing that often jogs people’s memories and brings certifiable facts out of the woodwork, so here goes. The old Arcade Lanes bowling alley on Olive Street in University City, MO had a “party room” that contained at least two rows of old wooden theater seats, and I asked the owner of the Arcade where they had come from. He said they were from an old theater on Grand that had been “near the Fox” and was torn down in the ‘40s or '50s. The “Grand Central” name didn’t ring a bell with him, but it’s the only theater that fits the description. I was hoping to acquire some of these seats—or at least direct them to a good home such as the City Museum—when and if the Arcade closed, but unfortunately the bowling alley and (presumably) the theater seats were destroyed by fire a couple of years later.

Does anyone know where to look for interior photos of these buildings? Is there an archive somewhere?

Are there any existing photos of the interior of this theatre?

This theatre gets a mention in the movie “With A Song In My Heart,” by Jane Froman (played by Susan Hayward) as a place where she performed early in her career. For those looking for photos, perhaps there are some of Jane in concert here.

The final use of the theatre was a three-day run of the Russian film “Chapayev.” The run ended October 1, 1935. A demolition permit was issued in December 1948 with actual razing occurring in December 1949.