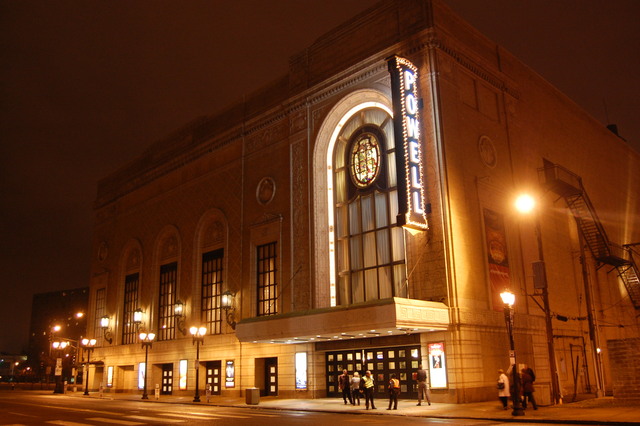 Thousands of lights once sparkled along Grand Avenue’s Theatre District. The most outstanding of the sights were the St. Louis Theatre and Missouri Theatre, six story vertical signs illuminating the evening sky.

The St. Louis Theatre opened November 25, 1925. Inside, the lobby resembled the Palace of Versailles – at least it was architects Rapp and Rapp’s version of a European palace. The mirrored walls reflected ornate white and gold decor. Rows of crystal chandeliers with tiers of candles hung from an ornate plaster ceiling. Flanked by fluted Corinthian colums, two balconies overlook the lobby.

The auditorium is a fairy-tale world of French opulence. Above is a great dome with curved edge rectagles and circles painted with gold leaf. The theater’s auditorium gives the impression of flowing movement. The balcony rails have small curtains hanging from them and are topped with red velvet.

The St. Louis Theatre had remained true to its namesakes – both the city and the French kin. The stage curtain bears the symbol of the city of St. Louis – the profile of the French king with his sword pointed heavenward astride his horse. The profile comes from the statue in front of the St. Louis Art Museum. Royal crowns adorn the exits, and fleur de lys decorate the walls.

In 1925, the orchestra pit stood below the stage. To the left of the pit was an organ which would rise from the floor. The St. Louis' $50,000 organ, a Kimball 4M-19R, was well known. Organist John Wagner helped make the organ famous by playing it on radio station WIL Radio. Because of this, he needed to wear headphones and take his cues from the radio station. He would often have to interrupt his program for commercials. Movie viewers had to put up with broken music and music that did not always conform with what was going on during the movie: Wagner played for the radio listeners' enjoyment. Use of the organ soon became obsolete because of the advent of the talkies.

When wide screen movies became popular, the St. Louis installed a new wide screen to keep up with the compitition. Since the organ was no longer needed, a larger stage covered the organ console. Under the stage, the organ became severly damaged. Somehow, water leaked into its main chamber, and vandals ruined some of the pipes. When the theater was sold to the St. Louis Symphony, its parts were strewn about the floor. The 1,500 pipes ranged from small pencil-sized to tubes to 18 foot tall cylinders weighing about 1,000 pounds. These pipes had allowed the organ to imitate special effects such as the xylophone, drums, a harp, piano and even horses' hooves – no doubt used during westerns. The organ is now in the possession of the American Theatre Organ Society.

Appropriately, the last movie to show at the St. Louis Theatre was “The Sound Of Music”, after a long run from 1965-1966.

The theatre closed immediately afterward, but in 1967 restoration work began for use as the new home for St Louis' Symphony Orchestra. A year later, the orchestra performed for the first time in the theater’s spectacularly restored auditorium, its seating reduced to a more roomier 2,700, and noted for its excellent acoustics.

Another restoration in 1995 brought further beauty to Powell Hall, named for its chief benefactor, a local businessman who donated $1 million towards the theater’s renovation. Along with the nearby Fox Theatre and Sheldon Memorial Hall, the Powell Symphony Hall is the focal point of St Louis' thriving performing arts district.

Powell Hall (the old-St. Louis)and the Michigan in Detroit may have some common elements, but are not twins.

Rapp & Rapp, shall we say, “mixed and matched” a number of times.
I’m certainly not being negative when saying this, but one must remember that in the mid-20s these movie palaces were coming off the drawing boards at a pretty fast clip and certain architectural-features could appear in more than one theatre.

To cite one example: the organ screens in the St. Louis (covered up in Powell Hall) can be seen at the Rialto Square in Joliet.

Here is an article about the renovation from the Northwest Arkansas Times, dated 1/22/68:

The St. Louis Symphony Orchestra will no longer have to compete with
rock ‘n’ roll musicians in the battles of the bands. The symphony has a new home, a glittering palace complete with crystal chandeliers
and a very proper bar salvaged from the New York Metropolitan Opera building which is now just a memory.

“It’s a dream, it’s just a dream”, said Walter Susskind, new conductor for the orchestra. The dream becomes reality Wednesday night when the symphony presents its first concert in Powell Hall, named for Walter S. Powell, whose widow provided a generous endowment for the project.

The orchestra’s new home was built more than 40 years ago as a movie theater to end them all with a 70-foot domed ceiling in the auditorium, Italian marble floors, carved and gilded mouldings. But its history wasn’t as happy as its promise, until now. The St. Louis Symphony Orchestra Society purchased the theater two years ago for about $400,000. Renovation has cost about $2 million.

Just saw online that a new sign was added to Powell. It’s an upright marquee in the place of the old one that was removed in the 1960s. I don’t know how close to the original it is, but I really doubt it is close. Here is a link to pics View link

This circa mid 70s photo shows some interior detail:
http://tinyurl.com/244lgx

The new vertical sign was installed in Aug.2007. While reports state that,“ its a copy of the original,” don’t be fooled. It’s not! I will say it looks great though. The exterior of the building now needs a good cleaning!!

I heard that the interior of this theatre was repainted in the last year to accent more of the plasterwork. Anyone heard anything? Also, I would like to see the symphony install some sort of “ grand drape” over the proscenium. That fire curtain thing they have hanging there now looks horrible. Any opinion on this?