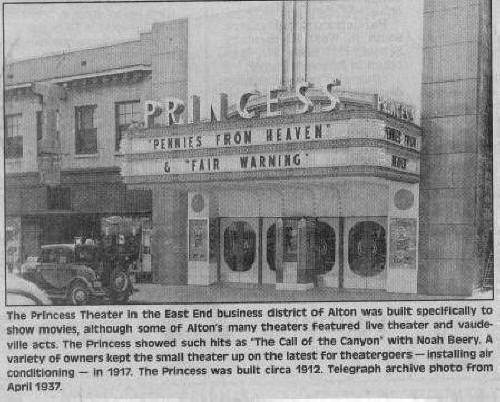 Opened in either 1908 or 1912, the Princess originally was a venue for both live stage entertainment and motion pictures, with a pipe organ installed in 1915 (which was removed during a 1937 remodeling).

The Princess' management caused a bit of a stir in Alton in 1921 when screened a Fatty Arbuckle comedy after the comedian was charged with the murder of an actress.

In the 20s, 30s and 40s, the theater’s ownership switched hands several times. The Princess received an Art Deco facelift in 1937, including a new facade and neon-lit canopy marquee.

During the 60s, the Princess began to decline in popularity, until it finally was closed in 1970.

During the 70s there was some talk of turning the old movie house into a disco, but nothing ever came of it. The Princess was demolished in 1981 and replaced by a parking lot.

Here is a February 1967 ad from the Alton Evening Telegraph:
http://tinyurl.com/chgu7t