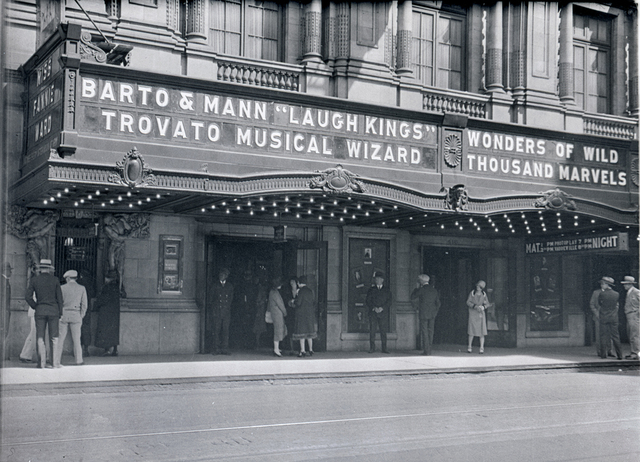 Any current photos of the resotred carriage entrance?

This photograph of the Orpheum Theatre was taken by George Mann in 1927.

When will the theater re-open or is the Hotel still trying to expand and demolish the auditorium and build two ballrooms while retaining the front of the Orpheum? Hope there is some good news about it being readied for a grand re-opening. Too bad the last owners tiered the main floor – hope that was not concrete and can be removed and seats put back in.

The Roberts brothers who owned not only the theater but hotels, television stations, and other holdings, have had financial difficulties and have sold the theater as well as other holdings to another developer who is evaluating the next step for the theater.

A few months ago I was walking by the theatre and noted one of the exit doors on St. Charles was open. Of course I looked in and saw the house lights on so I entered. I found the stage and the orchestra section being used for storage for the adjacent high-rise apartment which the Roberts brothers began and never completed before their financial troubles began.

Since the Roberts brothers no longer own the theatre, the old-Mayfair Hotel and the high-rise it would be appropriate to remove their name and catalogue the theatre as the ORPHEUM.

The time-frames when the Orpheum exhibited films: