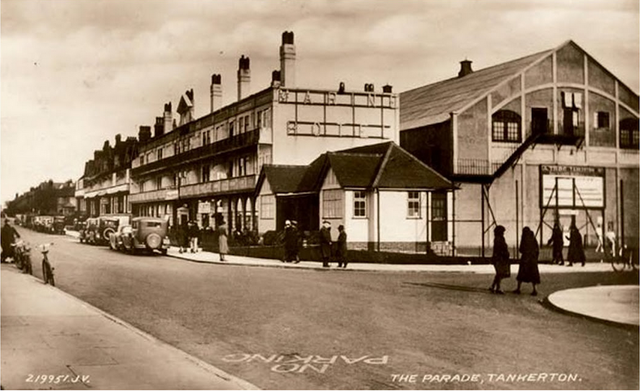 Located in Tankerton, near Whitstable, Kent. The Tankerton Grand Pavilion was built and opened as a roller skating rink which had a maple wood floor. The entrance was in the centre of a block of flats on Marine Parade, with the rink placed directly behind and parallel to the flats. The reinforced concrete structure was designed by local architect Major W. Puttick, who died before it was opened.

The skating rink was not a success, and closed within months of opening. The building was converted into a ‘talkie’ cinema, opening as the Troc Cinema on 9th February 1931 with Richard Barthelmess in “The Dawn Patrol”. A balcony with 250 seats had been constructed, and the stalls (which were on a level floor) seated 1,150. There was also a café. It was taken over by Associated British Cinemas(ABC) in 1932. They leased it to their Regent Cinemas subsidiary from 1933 to 1935. On 29th May 1938 it was taken over by an independent operator. The Troc Cinema was badly damaged by a fire on 9th October 1938.

When doing repairs it was decided that the original 1,400 seating capacity was too large for the cinema’s remote location from the centre of Whitstable, and the auditorium was divided across the centre to the plans of architect W.M. Bishop. The Troc Cinema re-opened with 750 seats on 19th June 1939 with “The Adventures of Robin Hood” starring Errol Flynn. The Troc Cinema was closed in 1947.

It was converted into a film studio. On 3rd January 1949, it reopened as a cinema, now known as the Embassy Cinema, which was a short lived venture, as it closed on 20th August 1950. In November 1950, it was re-opened as a 16mm cinema, and this lasted only a few months, closing for good in early-1951.

The auditorium of the building was then used by the fire service, and by a toy manufacturer, with the foyer closed off and unused. Last use was as a warehouse, and then it lay empty and abandoned until it was demolished in September 1996. The block of flats which fronted it remain.

A shame there is no photo. Unfortunately many cinemas now gone have no photographic record.

An old framed cinema display board was sold not too long ago on ebay. Originally from the Plaza in Margate, it was sold displaying archive photos/items of the Oxford in Whitstable and very mysteriously and rare photos/booklet of the Troc in Tankerton including internal photos which were listed as reproductions of the original materials. Where are these?!