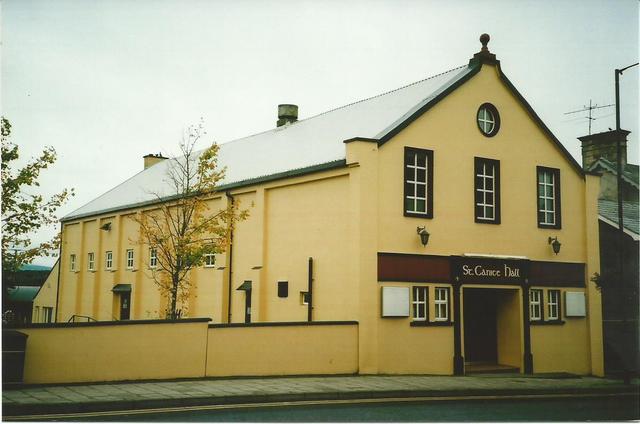 The British Film Institute Handbook for 2000 lists only St. Canice Hall as the town’s cinema. In June 2007 the local library informed me that, at that time, film shows only took place, in St. Canice Hall, from October to April, with the following week’s programme being advertised in the parish Sunday bulletin. I assume these were not full-time film shows, as this is the parish hall and, as such, is presumably used for many other activities. However, it does seem very likely that this hall was the Cinema listed in the Kine Year Books.

Films were shown as recently as 2013, but the parish priest Fr Aiden Mullan announced in 2015 that the he intended selling off the hall as it was losing money.

Further to popcorn_pete’s Comment, the Hall was, indeed, sold off. In a letter published in the weekly newsletter, in 2015, Fr Mullan said it had been running at a loss and was “costing the parish considerable expense”. He added that the falling numbers attending the parish bingo, which closed at the end of last year due to competition in the town, was a contributing factor behind the decision to sell the building. He revealed he had been approached by Irish cultural organisation Glór Dhún Geimhin, who had been seeking premises for a cultural centre with the intention of staging music, drama and allied Irish cultural events. In discussions, when they agreed to accommodate all existing users of the Hall if they managed it, and it was felt proper by the Parish Finance Committee and the Diocesan Authorities to sell St Canice’s.

The ownership was therefore transferred to Glór Dhún Geimhin, a voluntary Community Organisation established in 2009 to promote and develop Culture, Language and Heritage in the wider Dungiven area. Glór Dhún Geimhin said the Hall was in great need of modernisation and refurbishment. They successfully secured over £300,000 of Social Investment Funds, and the centre re-opened in early 2019. Regrettably, film screenings do not appear to be part of their cultural activities.