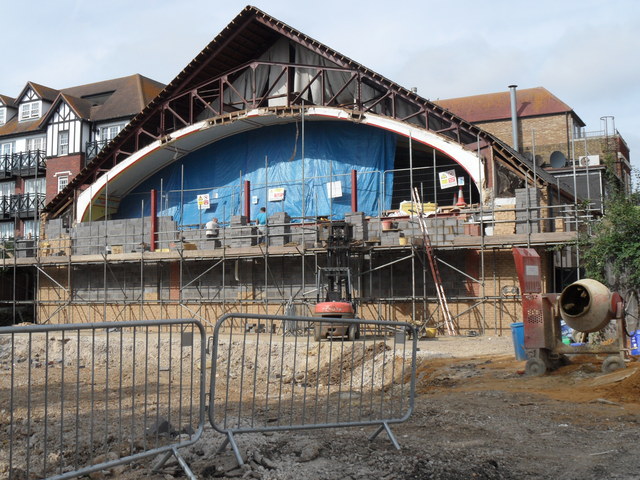 In Leigh-on-Sea, near Southend-on-Sea, Essex, the Corona Cinema opened in October 1929. It was operated by South Essex Cinema Syndicate Ltd. It was a single-storey auditorium with its own orchestra (variety shows accompanied the films) and also a 2 manual Christie organ. It had its own cafe. In the late-1930’s it was owned by the Ben Jay’s Circuit. By 1940 it was part of the Albion circuit and by the early-1950’s it was run by John E. Pearce.

Essoldo took over in 1954, and closed the cinema on 4th April 1959. After a period of disuse it became industrial premises but in 1982 was converted to the Radion Snooker Centre. Subsequently, a false floor was added and Superbowl bowling centre opened at first floor level (incidentally offering excellent close up views of the plaster decoration, based on marine designs, around the top of the walls!).

In 2010 developer Craneleigh submitted plans to demolish the former cinema and replace it with 38 flats and an (unspecified) “new leisure facility”. These were rejected by the councillors, but allowed by the Government on appeal a year later. However, a spokesman for Craneleigh then said it had decided to shelve the flats in favour of “something more attractive”. That turned out to be eight terraced houses, built facing Maple Avenue, that runs behind the cinema.

To facilitate that development, on 22nd July 2013 Riley’s Snooker Club closed. In late-2014 the rear third of the building was ‘chopped off’ to provide additional space for the houses. Craneleigh pledged to preserve what remained of the former cinema, and use it for “some sort of leisure facility”.

However, by June 2017 the building had been acquired by developer APS Design Associates, who submitted plans to demolish the entire building and replace it with 22 flats across five storeys.