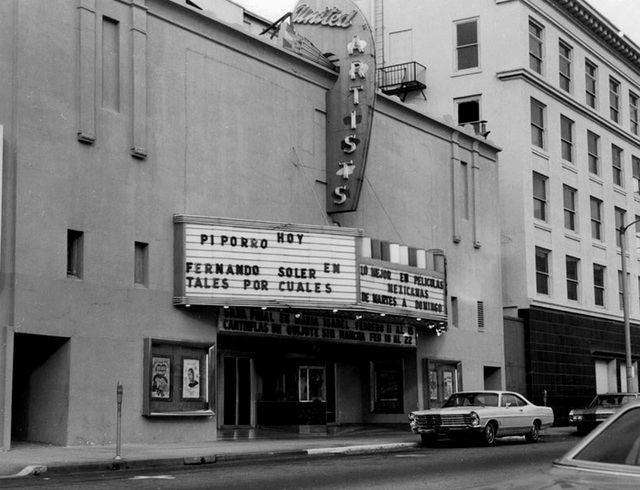 The California Theatre opened on November 27, 1923 with Buster Keaton in “Hospitality. The Wurlitzer organ was opened by organist Eddie Horton. By 1941 it was operated by Fox West Coast Theatres. From December 2, 1949 it was operated by United Artists and renamed United Artists Theatre. It later became a concert venue named Pomona Valley Auditorium. It is now a church.

Here is an item in Boxoffice magazine, April 1950:

Here is a March 1970 ad from the Pomona Progress-Bulletin:
http://tinyurl.com/ykjqrpo

I think this was a church when I was out there a while ago.

I see Sammie Girl was asking about the Lyric in 2008.

I began my theatre career at United Artists Pomona in 1966, where I met my wife, Sherry, who was a cashier for Mr. Walcott, the manager. Since I was hanging around the theatre so much, Mr. Walcott put me to work as the marquee boy to replace Rusty, who went to Vietnam. Mr. Walcott had a prosthetic leg and would have to carry the film upstairs one reel at a time. He was an old time performer who would entertain the staff during slow times by actually hypnotizing some of the employees. When Mr. Walcott became ill, he was replaced by Charles McCann, who managed for a few years longer. Elderly Mr. McCann would bring his equally elderly wife to work with him, and she would sew the torn masking and drapes in the building. He was dismayed that the company (UA) did not show enough appreciation for his wife’s efforts. We fondly remember some of the employees from those times — Mr. and Mrs. Deem, Carol Deem, and Linda Marshall. The projectors were carbon arc and there were a series of ancient dressing rooms under the stage which were definitely haunted. I’m 65 now and my wife and I are still, happily, in the theatre business.

This opened as the California theatre on November 27th, 1923. Grand opening ad posted. 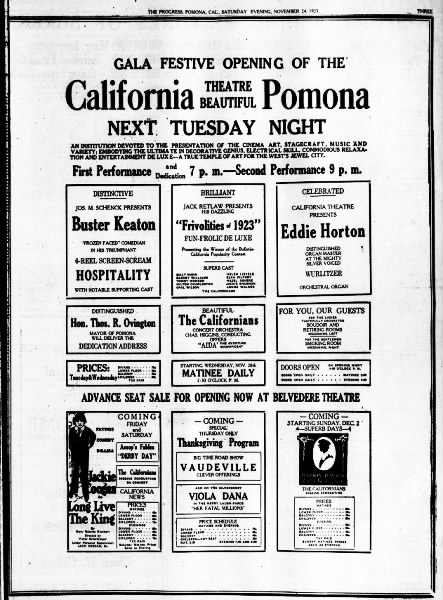 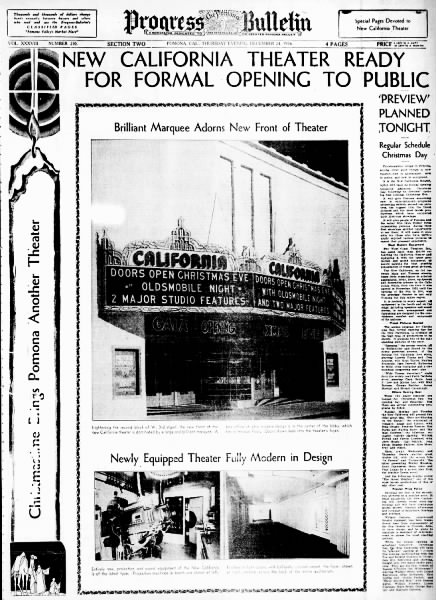