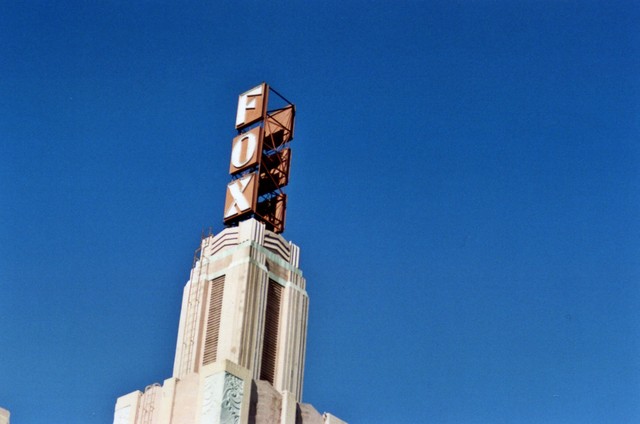 The Fox Theater in Pomona, California was opened by Fox West Coast Theatres on April 24, 1931 with Spencer Tracy in “6 Cylinder Love”. The auditorium seated 1,751 in orchestra and balcony levels.

Mann Theatres ceased showing regular movies at the Fox Theatre in 1976. It then operated as a Spanish-language movie theatre, before closing in the late-1980’s. It then began use as a concert venue. A 1990’s rave promoter painted over many of the original murals, stripped the theatre of most of its elegant fixtures and demolished its 1938 concession counter. After two teenagers died while attending rave parties at the theatre in 1999, the city stepped in, closing the theatre and purchased the building. As the theatre was still in danger, a ‘Save the Fox’ campaign of local citizens banded together. In 2007, local developers who specialize in renovating historic buildings bought the theatre from the city for $1.6 million and spent $10 million to restore the former movie palace. The Fox Theatre was totally renovated to be a ‘state of the art’ venue, with a restoration or replication of all historic features such as the tower sign, marquee, murals, and seats.

The Fox Theatre reopened with a April 18, 2009 gala fundraising dinner and ball, with actress Carol Channing as a special guest and many people appearing in 1930’s period dress. The Fox Theatre now hosts concerts, films and other events.

The Fox Theater was placed on the National Register of Historic Places in 1981.

Great to see that. The Fox looked like it was doomed a couple of years ago. I hope to get out there for an event soon.

Here is another night photo:
http://tinyurl.com/ylx9bk9

The Google car needs to hit downtown Pomona again now that the theatre is renovated and its marquee so beautiful!

The Friends of the Pomona Fox organization is committed to presenting interesting community programming at a low cost and to allow the community to see this fabulously restored theater. We offer tours (by appointment) as well as a series of regular screenings and programs. On August 28 we presented Rebel Without A Cause, and on September 25 we will be presenting the documentary, Chicano Rock!

Our web site is http://www.pomonafox.org. Visit us for more information on the theater and our programs.

Oh, and Jay Alan Sanford’s photos of the scale model are from the Garden Railroad at Fairplex and can be seen during the LA County Fair coming up in a week. Note that it is a reversed version of the real theater.

This theater was frequently used by the movie industry during the golden age of Hollywood for sneak previews and test screenings as it was far enough away from Hollywood to provide a more accurate barometer in terms of audience reaction to films prior to release. This fact is inherent Joe Gillis’s line in “Sunset Boulevard” when he says to Norma Desmond, with regard to her planned comeback film about Salome, “They’ll love it in Pomona”. 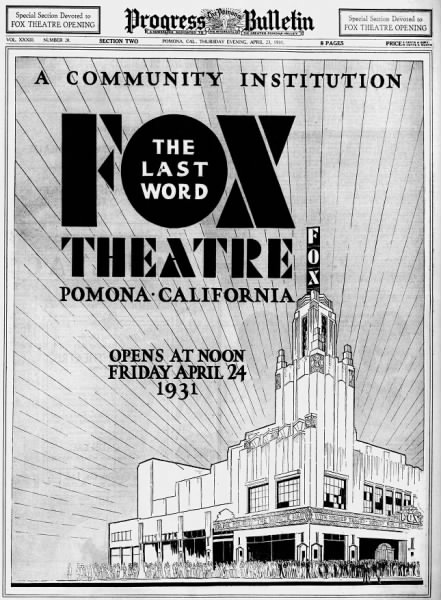