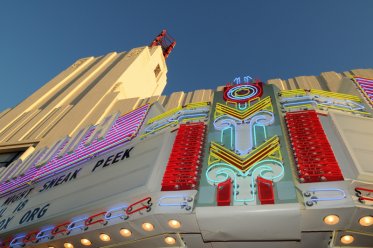 POMONA, CA —The Pomona Fox Theater reopened with a fundraiser event on April 18, 2009 along with a dinner served by onsite caterer Saffron, which will also have a retail space in the project. Film and stage actress Carol Channing was the guest of honor at the event, where she — along with members of the Tessier family which coordinated the reconstruction — cut the officlal ribbon opening the theater and later performed onstage.

Images from the opening night are available for viewing and purchase online at the website of Michael J. Elderman, a photographer from nearby Riverside, California, who has been documenting both the Pomona and Riverside Fox Theaters as they go through the process of becoming performing arts centers for their respective communities. His website is: www.mjeldermanphoto.ifp3.com

Elderman will also publish a book about the Riverside Fox, which is planning its re-opening gala for January, 2010, the 81st anniversary of the dedication of the original theater. The book will include both artistic and documentary photos of the Riverside Fox, along with a brief history of the uses of the theater, an essay about the preservation of historic buildings, and a critical commentary about Elderman’s art photography in the three projects he is currently photographing.

Elderman can be contacted through the website, or directly at

I commend the Fox project for making what I believe is the wise design choice of keeping the present marquee and restoring it, rather than going back to the original, which was rather flimsy-looking in my opinion. The present one is more substantial, graceful, and has—practically speaking—more efficient reader board space!
The Theatre Historical Society of America toured the Fox Pomona in 2005. It was a real mess then, but we could all see the potential. It’s so nice to see it realized.

What a fabulous-looking theatre! It’s heartening to read/hear about the re-openings of theatres. How I wish more such events would take place. We need them in our area, because we’ve got a real shortage of movie palaces here.

It’s exciting to see some of my past come back to life. I served my apprenticeship as a union projectionist at the Fox in 1950 and worked all the other theatres that were in downtown Pomona. They’ve done a wonderful job of restoration.

great article, very helpful for me! I want to advise you cv people topcvwritersuk.com/cvwritingspecialists-review/ – it will save you time on writing a resume or profile. Employers pay attention to this and it is very important when looking for a job, so a resume should show all your best skills.