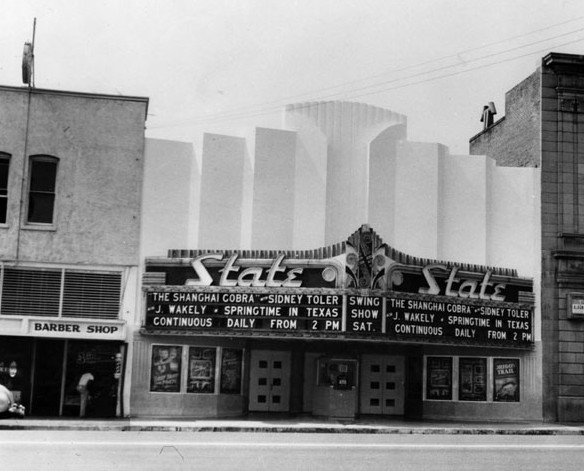 Southwest Builder and Contractor issue of March 1st, 1940, announced that architect C.A. Balch was preparing plans for the State Theatre, for Fox-West Coast.

The previous year, other issues of the same publication had announced plans for a theater on the same site, to have been built for John Drew, named as the operator of the Temple Theater in Glendale. This theater would have had a balcony and a total of 800 seats, but the project was never carried out. The interesting thing about these earlier announcements, though, is that they revealed that the State was built on the site of the former Belvedere Theater, which was destroyed by a fire. The fire story was covered in a Los Angeles Times article of November 21st, 1933.

I remember going to the State a few Times in the ‘50’s. Most of the time we went to the Fox.

The State had a balcony. Saw a double feature there in 1956

“The Court Jester” in VistaVision and “Jubel” with Glenn Ford

A bank and its parking lot now take up the entire west side of Garey between 200 and 300 South.