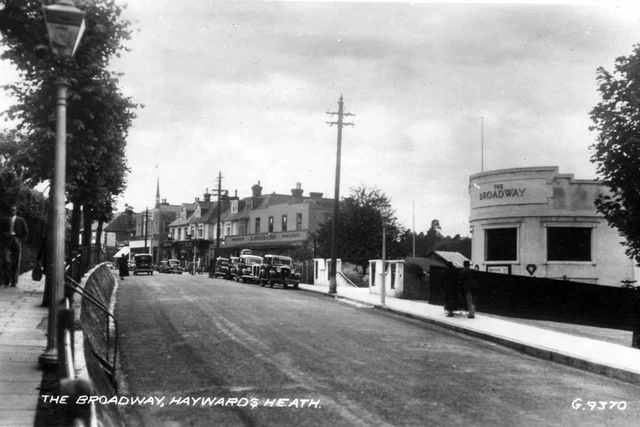 Located in Haywards Heath, West Sussex. The Broadway Cinema was built and opened by the independent Mid-Sussex Cinemas Co. on 12th September 1932 with Jack Buchanan in “Goodnight Vienna” and Laurel & Hardy in “Come Clean”. Seating was provided for 494 in the stalls and 231 in the circle. It had a rear projection system, with the projection box located at the back of the 24 feet deep stage. It was taken over by the Union Cinemas chain in late-July 1937. There were taken over by Associated British Cinemas(ABC) in October 1937.

The Broadway Cinema was closed on 31st January 1948 with Tyrone Power in “The Black Swan, the reason for closure being blamed on the governments' Entertainment Tax. It was reopened on 25th October 1948 with "The Naked City” and “Son of Rusty”. The Broadway Cinema was finally closed on 25th January 1952 with John Wayne in “Flying Leathernecks” and “Hard, Fast and Beautiful”.

The building remained unused until 1960 when it was converted into a furniture showroom. The building was demolished in 1987, and an office block named Rockwood House was built on the site.