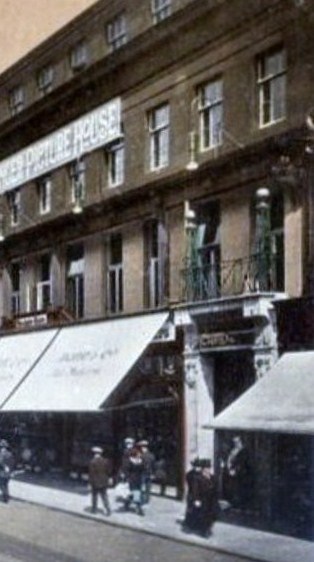 Located in Newcastle upon Tyne, in the north east of England, the Grainger Picture House, a conversion of a city centre drapery business, opened on 1st December 1913. The narrow entrance led to an auditorium parallel to the street. There was a cafe, which had an independent street entrance. The auditorium was in Neo-Classical style, the ceiling pierced by three domes. Seating was for 775 patrons: 566 in the stalls and 209 in the balcony.

In 1925 the cinema was purchased by Bernicia Ltd, a company controlled by George Black. Sound arrived on 30th December 1929 with “White Cargo” starring Leslie Faber and Maurice Evans. Soon afterwards the Grainger Picture House was taken over by Associated British Cinemas(ABC). After an expenditure of about £10,000 it reopened on 2nd December 1937 as the Grainger News Theatre, part of the McHarg circuit, with seating slightly reduced to 733 (515 in the stalls and 218 in the balcony). But this only lasted until 26th March 1938, and two days later the Grainger Cinema reverted to a regular cinema programme, beginning with Deanna Durbin in “Three Smart Girls”. “Genevieve” starring Kenneth More, played for seventeen weeks in 1953.

In January 1960 closure was announced when Dunn’s, hatters and outfitters, who occupied the premises next door, wished to expand. The Grainger Cinema closed on 26th March 1960, the final film being “Expresso Bongo” starring Cliff Richard. In October 1998 the cinema area was still in use as a retail outlet.

The Entrance of the Grainger Cinema was to the right of The FAS Stores..

2 photos uploaded to the relevant section.