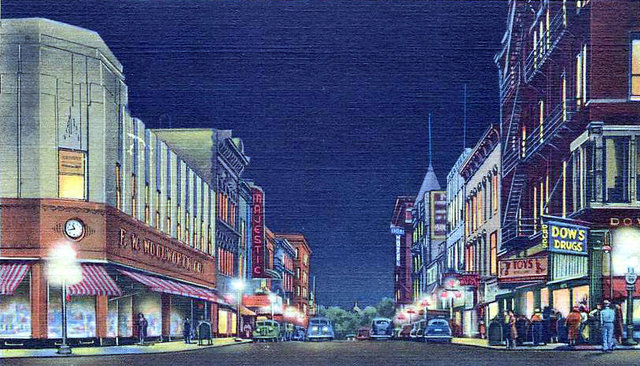 The January 24, 1914, issue of The Moving Picture World said that the Majestic Theatre in Springfield had opened on Christmas Day:

“‘Some ad,’ is the comment William Lord Wright makes on a full page advertisement from the Springfield, Ohio, Sun that he sends in, and we echo ‘Some ad.’ It announces the opening of the Majestic Theater on Christmas day and takes up an entire page, with an ornamental frame in line cut and four half tones of the players that might have been better printed. This is a 900 house, a sister theater to the Princess, which shares the advertisement and the fact that the Majestic will open Christmas a made to stand out like the proverbial sore thumb.”The line “a 900 house” is probably missing the word “Seat.”

The Google street shot above is incorrect. The Majestic sat one block south (to the left). It was located in the middle of the block near where the 12-story Credit Life Building sits.