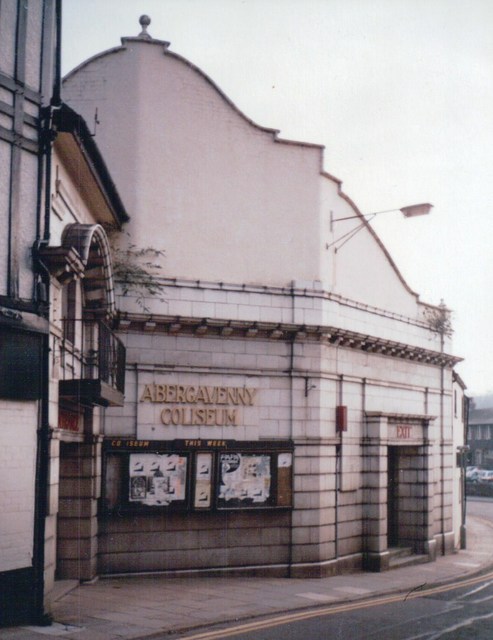 The Coliseum Cinema was opened by the Abergavenny Coliseum Co. Ltd. on 3rd November 1913 with “Quo-Vadis”. It had 780 seats, a 25 feet wide proscenium and two dressing rooms. Live shows were also presented, with melodramas such as “The Red Barn” and “Sweeney Todd – The Demon Barber of Fleet Street” featuring as part of the programming. On 10th October 1930 it was equipped with a Western Electric(WE) sound system, and the first ‘talkie’ to be screened here was “Atlantic” starring Madeleine Carroll. In the mid-1950’s it was equipped with a 28 feet wide CinemaScope screen.

It was converted into a J.D. Wetherspoon pub, which opened as the Coliseum on 14th March 2001.

Although a somewhat chequered part of cinema history of the old Coliseum Cinema, Abergavenny, ( now a Wetherspoons pub) visitors interested in the wider context may wish to know of my new book “ The Abergavenny Witch Hunt: An account of the prosecution of over twenty homosexuals in a small Welsh town in 1942”.

George Rowe, the 40-year-old Cinema manager at the time was at the centre of the Police inquiry after one of the page-boys complained about being molested. The boy’s complaint turned into a witch-hunt of ‘queers’ across Britain revealing a oddball mix of abused and abusers; a farmer, a clerk, two chefs, a fireman, several serving soldiers, a hairdresser, an actor and others were arrested and brought back to Abergavenny, where almost all the offences were committed.

Before the case ( always known as the ‘Rowe Case’) reached a Judge at Monmouthshire Assizes, three men attempted suicide, one young man succeeded in taking his own life. In the years that followed rumours persisted that several people had got away scot-free, including one notable public figure. Others went on the run to escape capture and disgrace, since all homosexuality was illegal in Britain until the changes started by the Sexual Offences Act, 1967.

Profits from the sales of the book will go to an Abergavenny charity is memory of nineteen-year old Lewis Matthews ( 1922-1942), born and bred in Abergavenny who rather than face the music, took his own life by throwing himself under a train.