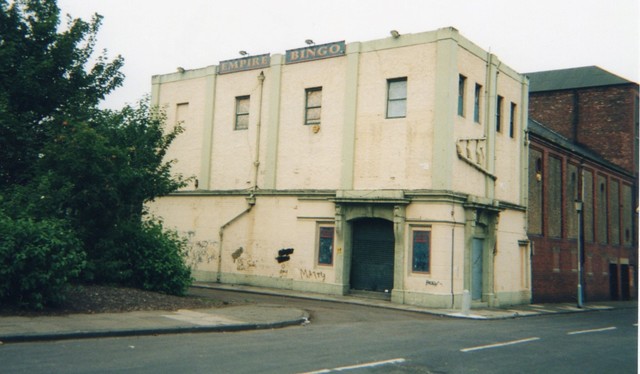 Located in Jarrow, Tyne & Wear. The New Empire Palace was opened on 2nd December 1912. By 1925 it had been re-named Empire Picture Hall, and included some live variety acts as part of the programme.

In 1929 it was equipped with a Western Electric(WE) sound system and was re-named Empire Cinema. It was operated by the Dawe Brothers Ltd.

The Empire Cinema was equipped with CinemaScope in 1955, and was closed on 31st October 1970. It was converted into a bingo club, which had closed by August 2001. It has since been demolished.

In 1966 this cinema launched the Empire Club; a cinema club for kids. Every Saturday we’d turn up and pay our shilling (5 pence) at the door, for which we could spend the day watching movies and “shorts” such as Danny the Dragon starring Pauline Quirk. We also received free candy and drinks and – on some occasions – hot dogs. There were competitions, games and live entertainment on the stage, hosted by a guy with a big moustache and a bowler hat, called Uncle Tom. Tom was assisted by his niece, who would sing. And all of this for the equivalent of just 5 pence. Our parents could pack us off to the Empire Club for the day, knowing we’d have a great time and that we’d be in safe hands. On joining we were given a circular, yellow plastic badge which had “The Empire Club” stamped upon it in red. We wore those badges with pride. Happy days….