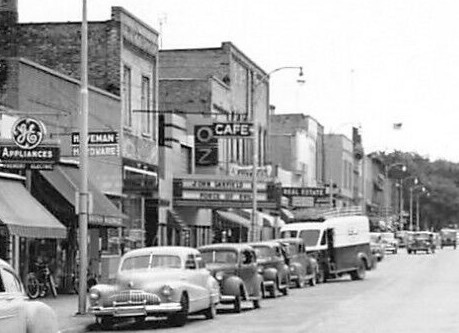 The Oz Theatre was opened prior to 1914. It was renamed Fremont Theatre in the 1970’s and closed in 1988. It has since been demolished.

The January 16, 1939, issue of The Film Daily reported that a new theater being built at Fremont, Michigan, for Harold Hedler would be completed about March 1. The architect was Joseph Krenek, who was also the contractor. The 468-seat house opened as the Oz Theatre, and was listed under that name in the Film Daily Yearbook at least as late as 1970. Sometime between then and 1982, when this photo was taken, it was renamed the Fremont Theatre. Its site is now partly occupied by a pedestrian passage to the parking lot behind the shops along the block.