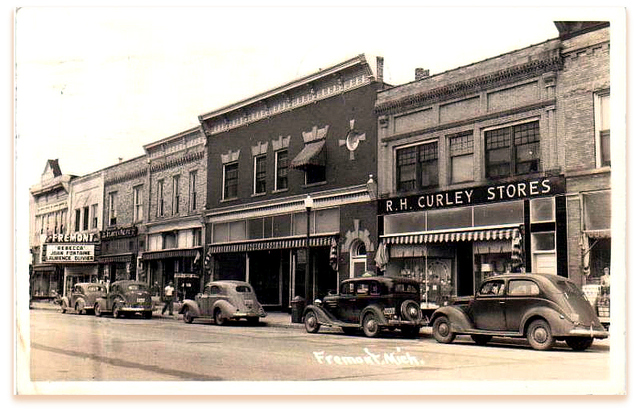 The Ideal Theatre was opened prior to 1918. Around 1939 it was renamed New Fremont Theatre. It was the third building from the corner. A small narrow building housing the entrance and lobby that led to the auditorium behind the building. It was closed around 1947. It now houses the Chamber of Commerce.

There were at least two houses called the Fremont Theatre in Fremont. The one in the photo Lost Memory linked to in the previous comment was the second. It was on West Main Street (approximately 32 W.,) and has been demolished. The theater in the photo at the top of our page was the older one (though its marquee says New Fremont on it) and its building is still standing at 7 E. Main Street, now housing the Fremont Area Chamber of Commerce. I’ve set Street View to that location.

Fremont also had a small multiplex called the Fremont Cinemas, located at 1027 W. Main Street, last operated by NorthStar Cinemas, but it closed a couple of years ago.

The Ideal Theatre is listed in the FDY as far back as 1926 (the first year the Yearbook provided a complete list of theaters,) but was in operation earlier. It was mentioned in multiple issues of Michigan Film Review in 1918. I haven’t discovered how much earlier the Ideal existed. A theater was operating in Fremont by 1915, when a movie and vaudeville house called the Lyric was gutted by a fire, as reported in the December 8 issue of The Moving Picture World. It could be that the Lyric reopened as the Ideal.