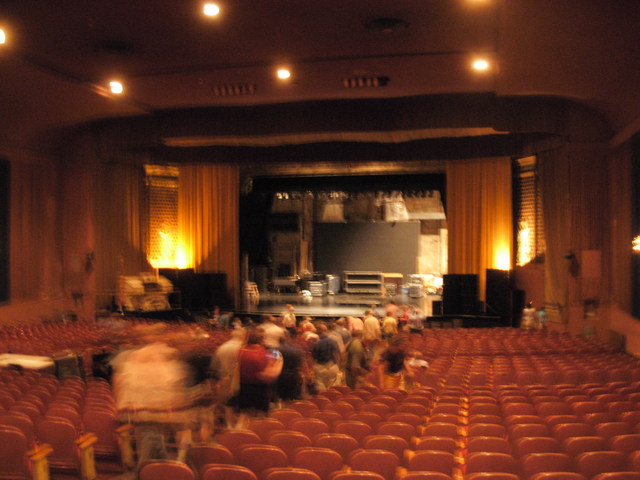 The Keswick Theatre is in Glenside, a Montgomery County suburb of Philadelphia. The theatre was designed in a Tudor Revival style by Philadelphia architect Horace Trumbauer, who also designed the Philadelphia Art Museum. A private opening on Christmas 1928 was held for the Kiwanis Follies. The Keswick Theatre opened to the public on December 27, 1928, with vaudeville and the silent version of the Warner Bros. movie “Glorious Betsy” starring Dolores Costello, which also had a sound on disc version. The theatre was wired for sound, but the equipment was not yet ready.

The 1,366-seat Keswick Theatre played host to everyone from Paul Robeson to the best big-budget films of the day. In 1955, the theatre was remodelled to host CinemaScope films.

In the Spring 1980 the theatre closed, and demolition loomed. Community activists organized a nonprofit organization to save the theatre, and operated the theatre with live shows from 1981 to December 1985, when it closed again.

The Keswick Theatre reopened in March 1988 under private ownership, with its current incarnation, as a place to see a wildly diverse array of talent. The acoustically luscious theatre was fully refurbished in 1994.

The original theatre pipe organ was an Aeolian Organ. The current organ is a 1,700 pipe Moller Theatre Organ, originally installed in 1928 in the Sedgwick Theatre in Philadelphia.

From the Montgomery News:

After opening its doors in 1928, the Keswick Theatre has become a favorite historical landmark in Glenside. To help make sure the theater is part of the community for years to come, it is undergoing renovations, which began June 25.

Hey veyoung52, it was called the Warren theatre in 1960 when Windjammer played there in Atlantic City. It was supposed to start July 29, 1960. In the same month I also see articles about it being demolished in the fall 1960.

Don’t forget when Cinarama left Philly it later came to the Keswick. The 35mm projectors were taken out and the 3 system cinarama was installed.

NO, the Boyd was the only 3 projector true Cinerama venue in the Phila area.

Mel, who owned the theater gutted the booth and installed the euipment for cinarama. I was their. My father made all the signs for the theater inside and out. This WAS after its run in Philly

HowardBHaas… I believe you’re mistaken about the Keswick. A 3-projector run of “Windjammer” is cited in the Showcase Presentations in Philadelphia article if you want playdate details.

Thanks Michael Coate for that wonderful compilation!

I was an usher here from 1973-1975. Films we played included The Sting, A Touch of Class, American Graffiti. Worked there for Me. Mel Koff,who taught me a lot about the film business. He was a great guy to work for.