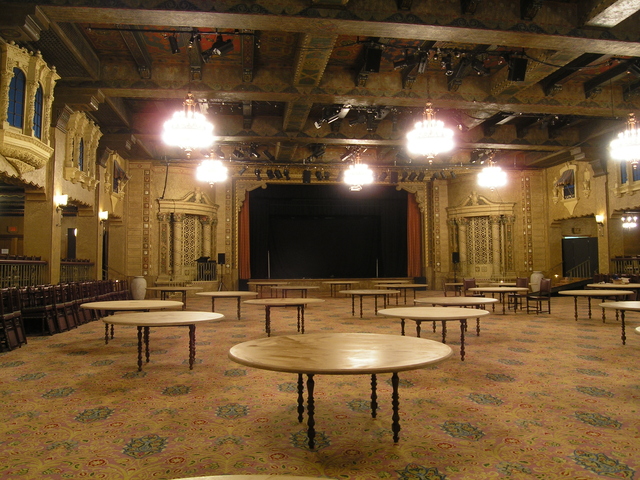 Designed by Cedric Ballantyne and Associates, it was originally built under the Regent Theatre for use as a cabaret/ballroom. A permit for such use was not granted and Hoyt’s then turned it into a single level cinema. It opened on 10th May 1929 with the movie, “Alias Jimmy Valentine” starring William Haines.

The theatre was closed for around six months after being damaged by the fire which destroyed the Regent Theatre in April 1945. The capacity was reduced to 865 in 1958 for the installation of Cinerama. “How the West was Won” was the longest running film in the Plaza Theatre with 101 weeks in 1963-4.

The cinema closed on 4 November 1970 with “Butch Cassidy and the Sundance Kid” and some time later was practically destroyed by the Melbourne City Council with shops and a fountain located in the former auditorium. The ceiling of the auditorium and a false window above the entrance to the auditorium are the only original pieces left.

The Plaza Theatre was restored to its original pre-Cinemrama appearance and together the restoration of the Regent Theatre, solely from photographs.

The Plaza re-opened in August 1996 and is now known as the Plaza Ballroom and used for various functions such as weddings, fashion parades, opening night parties etc. It is operated by Marriner Theatres.

A magnificent “recreation”, as opposed to “restoration”. Having been completely gutted in the early 1970’s to create a shopping plaza (excuse the pun), the incredible recreation of this 1929 theatre must be seen to be believed. “THE” Cinema Recreation treasure of the 20th Century.

The Plaza opened in 1929 as a talkie only cinema and had a small 2 manual cinema organ. This organ ened up first in Darwin and is now in Adelaide. The original plans for the Plaza’s use as a cabaret/ballroom seem not to have been altered too much as the sides of the auditorium were flanked by very large colonades.

An article about three Australian theaters in the October 5, 1929, issue of Motion Picture News was illustrated primarily with photos of the interior of the Plaza. Here is the first page. Images can be enlarged by clicking on the + sign in the toolbar at lower right of the web page.