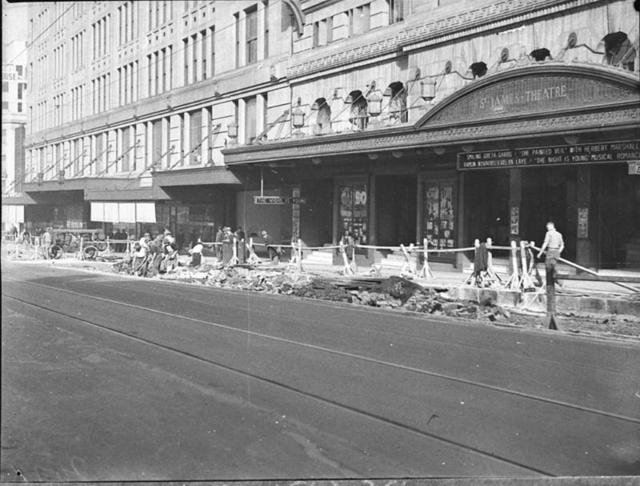 The St. James Theatre opened as a legitimate theatre on 1st April 1926 with the musical “No No Nanette”. It had a seating capacity for 1,773. “Rio Rita” was staged in 1928. Movies were shown from August 1929, however it returned to live theatre in August 1930 for twelve months. The Adamesque style theatre moved permanently to movies in August 1931.

The St. James Theatre was taken over by MGM in 1934 and screened many of the studio’s classic films. The capacity of the theatre was listed in 1955 as 1,609 seats. The grand cinema closed with “Gone With The Wind” on 20 March 1971 and was demolished to make way for a 26 storey office block.

The St James was another of Sydney’s celebrated Henry White designs like the cherished State nearby and the lost lamented Wintergarden at Rose Bay. Apart from the 3 level auditorium, its cameo designs and nouveau 20s style, it was maintained to a perfect 20s degree and style by MGM as their premier house. Oddly though, in 1959 they hung huge swags of cream satin screen curtains covering half the side walls as well. This was to give the impression that there was this huge cinerama type screen behined. They did this to open BEN HUR and then screened the film in 35mm cinemascope. The St James never did have 70mm even with all the 70mm MGM films released. Just in the closing weeks, MGM sensibly ran a festival of classics and made them available to us 15 year olds at just 50c a ticket. you can imagine the stampede, and the cinema every time I attended was packed. I saw WIZ OF OZ. HUCK FINN, SINGIN IN THE RAIN etc in this period and for a short last time was able to run all over this elegant theatre with my friends. Above the theatre was the most beautiful 20s shopping block with the most exclusive shops and edesigners in Sydney. It was famous for being the nth degree in exclusive female shopping. It was truly like something from LOVELY TO LOOK AT or any MGM technicolour musical in real life. The sale of all MGM’s cinemas in 1971 by the new Kekorian admin in the USA was the reason for the closure and demolition. I went to the auction and saw the unveiled stage and walls for the first time in my life. So beautiful, side boxes, balconies and frescoes.
To add insult to injury, the c/s screen fitted within the old proscenium so all this dumb drapery from 1959 was just for before-the show effect and the awesome 20s decor was hidden all those years. Then a bulldozer ground the whole lot to dust in the name of progress and someone got richer from that.

Have you seen the beautiful St James Theatre in Wellington, New Zealand?? That lovely theatre was built in 1912 and it was designed by Henry White. It’s still around today and it is home to the Royal New Zealand Ballet Company.
http://www.stjames.co.nz for more details

A former Chief Projectionist from the 60’s to close of the St. James, Bob Allan (deceased) ,was a friend of mine. I have seen 16m/m home movies of the inner workings including the typical MGM 3 projectors, 3 manned projection room and shift electrician working the many rehostat dimmers for presentation etc. I have also sighted architect plans, commissioned by MGM to convert the St. James into a triple cinema complex(although never obviously undertaken) atleast 2 decades before the first one was commissioned in Sydney ( Village Cinema City).

I have only a very vague memory of the interior of this theatre and have never been able to locate any photographs.
If anyone has any I would be very grateful if they would post them on this site.
There must have been some in the MGM archives in Sydney but possibly lost by now.

Thanks very much for these photos KenRoe. The building was even finer than I remember, what a scandal that it was demolished for just another boring office block which would not be missed if it disappeared tomorrow!!
It’s unbelievable how much damage was done to so many cities in the 60’s, 70’s and to a slightly lesser extent in the 80’s.

Being one of the relief assistant projectionist at the St James was an enormous job. The presentation timing for slides, dimmers for candelabras, chandeliers, curtain spots were all done to a scripted well timed program. The projectionist was at one end of the box standing by #1 machine, the asst was at the other end near the slide arc and dimmers…and both were coordinated by clocks, on the wall to a well rehearsed routine. I also remember the three machines had a very large rake on them as the box was so high up at the back of the mezzanine seating area. A pair of opera binoculars assisted with focusing the widescreen ratio pics. Loved my shifts there as a relief asst projectionist in the early 70s.