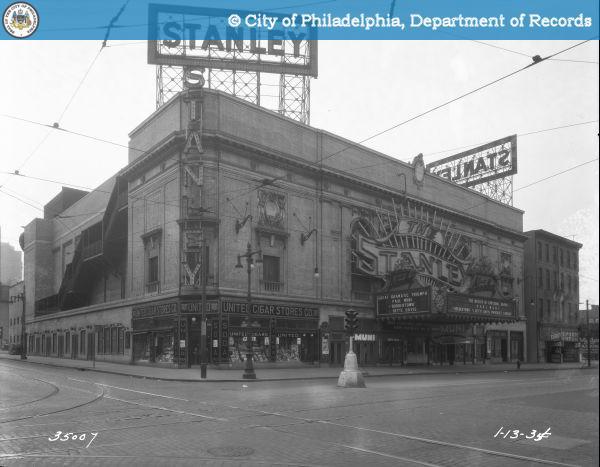 The Stanley Theatre was one of the major motion picture palaces of Philadelphia. This was the second theatre named after Stanley Mastbaum, the late president of the Stanley Co. (which later became Stanley Warner). The original Stanley Theatre’s name was changed to Stanton Theatre (and later Milgram Theatre). The Stanley Theatre opened January 28, 1921 with Cecil B. DeMille’s “Forbidden Fruit” starring Agnes Ayres. Designed by architectural firm Hoffman-Hennon Co., the lobby was 72 feet by 26 feet, lined with rose Travertine marble and had a polychrome vaulted ceiling. The auditorium was in an Adam style design in shades of old rose and ivory. The Stanley Theatre opened with 3,000 seats, but with reseating gradually brought it down to 2,916. The original screen was only twelve feet by sixteen feet. There was a 3 manual, 21 rank Kimball organ.

Jules Mastbaum, who succeeded his brother as president of the Stanley Company, made this theatre into a leading centre for operas and movies. Silent pictures were accompanied by a 55 piece symphony orchestra, the city’s best after the Philadelphia Orchestra (which itself performed once in 1923). The orchestra also played concerts. The stage shows were the city’s best, with stars of stage, screen and radio.

In May 1929, Al Capone was arrested in the Stanley Theatre’s lobby for having concealed weapons.

Because of the large seating capacity, Stanley Warner played many popular movies here. The Stanley Theatre and the Stanton Theatre (later Milgram Theatre) were the major venues for horror films in Philadelphia. In 1931, Bela Lugosi in “Dracula” and Boris Karloff in “Frankenstein” (which had a midnight show) were shown. Fredric March in “Dr Jekyll and Mr. Hyde” was shown in 1932, and in 1933, Charles Laughton “Island of Lost Souls” and Fay Wray in “King Kong”. In 1933, the theatre was redecorated to a red velvet and crystal chandeliered interior. In 1935, architect Drew Eberson redesigned the lobby and starting with that year, the entertainment consisted solely of first run pictures. In April 1936, fans crowded the theatre for the visit of Al Jolson for the premiere of his film “The Singing Kid”. “Snow White and the Seven Dwarfs” broke attendance records in 1938, and “Pinocchio” was shown in 1940. Abbott & Costello appeared in person for the opening of their movie “In the Navy” in June 1941. Stars led off by Bob Hope attended the world premiere of “Nothing But the Truth” on September 17, 1941. Greer Garson in “Mrs Miniver” shattered attendance records during a two month run in 1942. Other popular films shown included, Cary Grant in Alfred Hitchcock’s “Notorious”(1946), James Stewart in “It’s a Wonderful Life”(1947), and Humphrey Bogart in “Key Largo”(1948). Frank Sinatra appeared at the October 1953 opening of “From Here to Eternity”. Marlon Brando in “On the Waterfront” was shown in 1954.

By 1955, the screen was forty feet wide. In 1957, at the opening of the movie “The Delicate Delinquent” the film’s star Jerry Lewis, appeared on stage. In January, 1958, James Garner appeared in person on the stage for the world premiere of the war feature “Darby’s Rangers”.

In 1959, much of the auditorium’s ornate decor was covered over with gray drapes in a modernization to the plans of architect William Harold Lee. Cinder block was used to reduce the seating capacity from 2,916 to 2,300, but increased the screen to a huge 64 feet wide. With salmon as the color also of the carpet and rocking chair seats, the auditorium reopened with a gala premiere of Doris Day in “Pillow Talk” on November 10, 1959, with film star Charlton Heston appearing in person. 70mm movies showcased here including Marlon Brando in “Mutiny on the Bounty”(1962), Elizabeth Taylor in “Cleopatra”(1963), Rex Harrison in “My Fair Lady”(1964), Julie Andres in “Thoroughly Modern Millie” (1967), Richard Harris in “Camelot”(1967), Fred Astaire in “Finian’s Rainbow”(1969).

Thanks to Vince Young for the last day information as below, from an ad:

“THE SUPERFIGHT” The computerized fight sports fans will be talking about for years. Who’s the Greatest? Rocky MARCIANO vs Muhammed ALI Filmed Live and in Color This is not animation or photo tricks but live action in color, filmed in secret and edited to a computer printout programmed for over 200 variables. This great bout will never be seen on T.V. or in newsreels. There will be no second run….This has to be the greatest fight ever!"

In reply to my question as to which Center City movie theater “Auntie Mame” was shown, Vince Young replied that “Mame” was the well received Christmas 1958 attraction at the Stanley….ran for weeks on end.

Last night, I enjoyed at the Prince Music Theater an archival print of “North by Northwest” with a Q & A on stage before the movie of star Eva Marie Saint. I asked Vince Young where it was shown in original issue, and he replied that it was a big hit at the Stanley in the summer of 1959.

Click here for an exterior view of the Stanley Theatre in 1932.

Here’s a vintage theater program from January, 1927 from the Stanley Theatre. I have several more on my website. They apparently put on a big show in addition to the movies.

The Stanley Theater was renovated in 1959 in SALMON not GRAY color – draped walls, screen, rocking chair seats, carpeting – all in the same SALMON color. Reopening premiere was Pillow Talk. The Stanley was upgraded to 70mm projection at that time, and many movies were roadshown there in the 1960s including Thoroughly Modern Millie. Not all were in 70mm. Hawaii was in 35 mm mono. The Great Race was not reserved-seat and was presented in 35mm.

JohnShiner: Your recent comments on roadshows and 70mm suggest you will enjoy the following article on Philadelphia’s roadshow and large-format history, if you aren’t already aware of it.

Images of the Stanley refresh in 1959 to the plans of William H. Lee in photos.