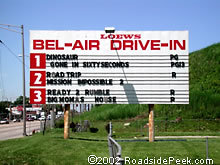 Opened as a single screen on March 2, 1956 with Marlon Brando in “Guys and Dolls” & Clayton Moore in “The Lone Ranger”. The Bel-Air Drive-In added a second screen a few weeks later which was located on the rear of the opening screen. A 3rd screen was added in 1979, with a capacity for around 1,000 cars, one of the larger outdoor theatres in Illinois.

The Bel-Air Drive-In typically screened double-features, and was one of only a few drive-ins in the US to feature two-sided screens, enabling the theatre to show two different double bills at once.

Last operated by Loews Cineplex, the Bel-Air Drive-In has been closed since September 17, 2000 and has since been demolished.

I went there a few times back in the early 1960s I was always told that it was built on an old landfill / garbage dump. Can anyone verify this ?

I used to go there as well. I heard the same stories about the landfill or scrapyard.

Verification of that story about what came before the Bel-Air. From the June 11, 1955 Motion Picture Herald:

Plans are under way for a new $750,000 drive-in theatre in the Chicago area, it was announced by M & R Theatres. A 25-year lease for the old Quarry site had been obtained. The drive-in is to be called the Bel-Air and that it will have a capacity of 2,500 cars. “Walk-in seats” will be a feature. CinemaScope, VistaVision and wide screen pictures will be projected, with the latest modern equipment, according to Harry Sears, on a 135 by 90-foot screen which he says will be the largest in the country.

A former quarry makes sense. Years ago, once the aggregate had been removed from the quarries, they became dump sites for garbage and worse.

The March 24, 1956 Motion Picture Herald wrote in the Chicago section, “The Bel-Air, which made its debut as the only outdoor theatre with walk-in seats, plans to show only ‘the finest attractions’ each week, plus cartoons for children. Bottle warmers are provided for babies. Children under 12 are admitted free at all times, and youngsters have free playgrounds. There will be concentrated promotion for family attendance.”

On March 14, 1956, Motion Picture Exhibitor reported, “An unfortunate situation occurred at the opening night of the new million-dollar Bel-Air Drive-In in suburban Cicero. Temperatures in the high 50’s had melted the snow and softened the ground in the huge parking area to such an extent that many of the cars sank to their hubs. Tractors were used to pull them out. Further showings at the theatre were postponed until the ground hardens. Bel-Air was built and is operated by Jerome and Raymond Marks, Martin Rosenfield,” (and the rest, if any, was cut off)

As of April 1964, the Bel-Air was owned by Raymond J. Marks and Martin G. Rosenfeld, operating as M & R Amusement Companies, per a Boxoffice story about their acquisition of the Skyhi and Dundale drive-ins. A July 1966 note about plans for the Wheeling Twin added Richard Rosenfield to the previous two names. By June 1978, the company spokesman was Louis Marks.

Boxoffice, April 30, 1979: “In announcing that a third screen will add to the Bel-Air activity June 8, Louis Marks of M & R Amusement Co. said, “With the good product coming along for the summer, there should be enough to support three screens in each of our properties.” M & R had some months ago had third screens added to the Twin and Double outdoor theatres.”

Boxoffice, June 9, 1980: “Owners of Chicago’s main-line hardtop theaters "were not enthusiastic about having live pigs in their theaters,” so Avco Embassy pictures staged what is believed to be the first major world premiere in a drive-in May 30, taking over the Bel-Air Drive-In to launch its release of ‘Hog Wild.’"

According the Berwyn IL newspaper The Life, the Bel-Air’s final movies were shown on Sunday, Sept. 17, 2000.

One screen had “Backstage” followed by “Highlander: Endgame.” Another had “Original Kings of Comedy” then “Bless the Child.” The last double-header started with “Turn It Up,” and the Bel-Air’s final movie, based on scheduled start time, was “The Cell.”

As mentioned above, plans for the Bel-Air included a (single?) 135 by 90-foot screen, and the drive-in opened showing a single program. Less than two months later, the Bel-Air was advertising shows on its North and South screens. Considering its layout, with a double-sided screen in the middle of the lot, I’d guess that’s what it looked like when it opened, and the first few chilly spring weeks only had movies on one side. Here’s the first double-screen ad: 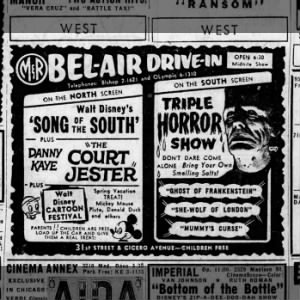 The Bel-Air added its third screen in 1979, switching its newspaper ad from two programs to three on June 15.