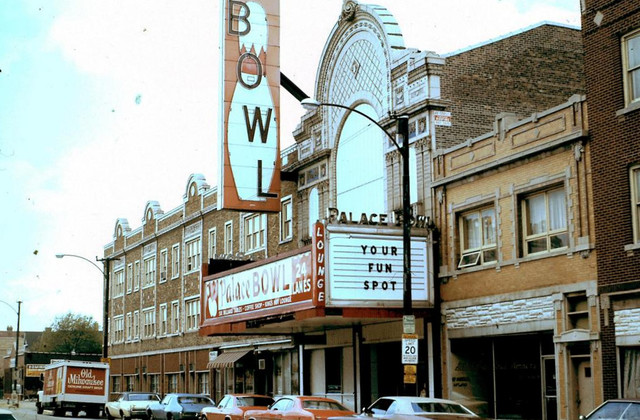 The Palace Theatre opened on March 13, 1927 (it was first listed in the Film Daily Yearbook for 1929). It featured an ornate terra-cotta facade with a large arched window over the main entrance. It was built in Italian Renaissance style and was equipped with a Barton organ.

The Palace Theatre was closed as a movie house on November 4, 1951 with “Big Carnival” & Paul Douglas in “Angels in the Outfield”. On August 22, 1952 it was converted to a bowling alley. It still operated in this capacity until 2004, when the building was sold and was demolished in 2005.

Sorry ‘bout this, but I’ve a strong feeling the 'status’ of the PALACE is now squarely under the heading of DEMOLISHED.

Someone (besides me that is) needs to travel by and conduct and official post mortem.

The caption for this interior photo states that the Palace is now a parking lot:
http://tinyurl.com/2o4r4m

There is a photo of the Palace Bowl on this page:
http://tinyurl.com/5o86bm

Searching for photos of when it was a movie theatre. I will keep in touch when I find some.

Searching for photos of when it was a movie theatre. I will keep in touch when I find some. My parents, grandparents and myself all grew up in this area. Thanks

Interesting photo posted on this blog:

Weekend afternoons at the 40’s Palace featured movies and LIVE ACTS. Admission price for kids was really high, 25 cents compared to the other local places at 10 cents. One of the last films I saw there was 1948s Three Musketeers with Lana Turner.

1927 post card added credit Kenneth Andresen‎. Could have been the Grand Opening, given all the flags. The marquee also appears to read “We Are Open”. So that may narrow down the opening year. Maybe someone with better German than I can read the hand written caption.

This was a million dollar theatre that launched on March 13, 1927 with a $25,000 Barton organ. It went out of business on November 4, 1951 after showings of “Big Carnival” and “Angels in the Outfield.” On August 22, 1952, the Palace Bowl launched in the refurbished former theatre. It was renamed the Cermak Bowl and the City Council bought the business andvoted to raze the building in 2004 which occurred in 2005.