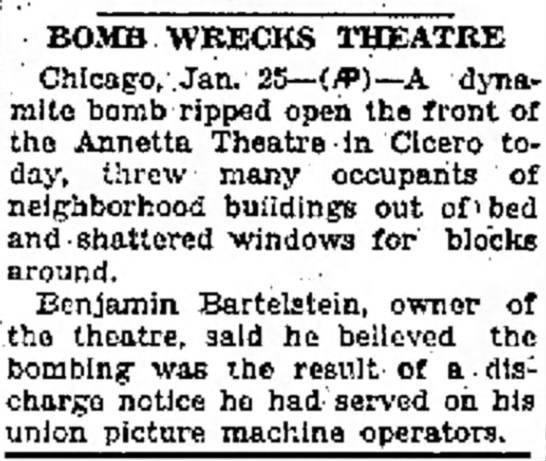 Opened in the 1910’s, the Annetta Theatre seated 800, and was located on S. Laramie Avenue (then known as 52nd Avenue) near 23rd Place. It closed in 1951 and a Salvation Army community center now operates from the building.

Wasn’t this theater called The Annetta, like the nearby ‘20s hotel?
Doug Deuchler

The theatre building is actually still there and is located to the right of the parking lot shown in the picture.

I take that back, the building is behind the person taking the photo. It is now occupied by the salvation army

Just confirming.. YES … The Salvation Army building in the photo is the former theatre.

This was a great kid place in the 40’s……3 features, cartoons and short subjects on Sat and Sunday afternoon.Cost about ten cents. We were upset when the price shot up to eleven.

The city councils of Berwyn and Chicago offered rewards totaling $1,000 yesterday for information leading to the capture and conviction of the three bandits, one of whom on Sunday killed Miss Pearl Eggleston, 17 year old usher at the Ritz theater in Berwyn. Police Magistrate Joseph Cerny of Berwyn added $100 to tho rewards. The crime has shocked the whole community. The Chicago council adopted a resolution offered by Ald. Horan [26th] saying: “Whereas, the entire city is stunned with horror at the wanton and cold blooded slaying of Miss Pearl Eggleston, the commissioner of police is hereby authorized to offer a reward of $500 for her slayers.” The police revealed that perpetrators of a theater holdup in Cicero recently are believed responsible for the killing of the girl last Sunday night when she screamed as the theater cashier was being robbed.

During the Cicero robbery an audience of 1,000 was unaware of what was happening when, on March 18, three armed youths drove up to the Annetta theater, 2337 South 62nd Avenue, and took $500 from B. Bartelstein, the manager, who was in the cashier’s cage at the time. Five persons who were passing the theater at that time were forced by the robbers to stand in the lobby with their faces to the wall. Methods used in each robbery and the similarity of the descriptions of the robbers lead police to believe that the same trio committed both crimes. The Cicero witnesses will be asked to view suspects seized in the hunt for Miss Eggleston’s slayer. Miss Gertrude Plante, the cashier of the Ritz theater in Berwyn, who saw her friend shot down, collapsed yesterday. She collapsed in her home, 113 South Elmwood avenue, Oak Park. Sho also is suffering from a bruise inflicted by a piece of metal torn from a money changing machine by the bullet that killed her friend who was with her in the cashier’s cage at the time of the holdup. The cashier, with a physician, went to the Berwyn police station, but was unable to identify a suspect there.

Chief of Police Charles Levy is inclined to the belief that Miss Eggleston was murdered by a youth, her sudden recognition of whom made her scream. He thinks a young man may have obtained information from her as to the location of the $1,400 taken in the holdup without her having any idea he was a robber. Rather than face certain identification by her whom he had expected to be at work inside tho theater, the youth killed her, Chief Levy believes. “I wish they’d keep their crooks in Chicago,” Mayor Frank Janda of Berwyn said. “The fact that the car was found there shows where the slayers came from.”