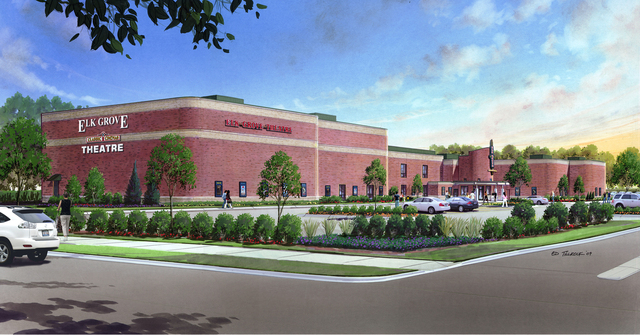 Opened in 1971, as the single-screen Jerry Lewis Cinema seating 500, at the Grove Mall, the Elk Grove’s first go-around as a movie house was short-lived, as it was shuttered within a couple years of opening.

From 1973 until closing again in 1981, the Elk Grove Theater was operated under independent ownership.

After closing, the theater was gutted and was used for storage. Part of its parking lot was acquired to construct a Burger King restaurant.

In 1986, the owners of the Classic Cinemas chain, which operates several restored suburban Chicago movie palaces such as the Tivoli (Downers Grove), York (Elmhurst) and Lake (Oak Park), began to lease the old theater, and completely rebuilt it. The theater became a twin, with all new seating, projection equipment, concession stands, and new signage. The Elk Grove Theater reopened in 1987 as a bargain theater.

Ten years later, with the construction of the Elk Grove Town Center shopping center around the theater, Classic Cinemas purchased the Elk Grove Theater and added four more screens, refurbished the existing auditoriums, rebuilt the lobby and concession areas, and added a party room overlooking the lobby area. The six auditoriums are each equipped with Dolby Digital and SDDS sound processing and HPS 4000 Digital Surround Sound as well as loveseats.

In May of 2003, Classic Cinemas announced that the Elk Grove Theater was switching from a bargain house to a first run house, due to rising operating costs, starting with the films “The Lizzie McGuire Movie”, “Holes” and “X2: X Men United”.

Classic Cinemas plans on remodeling the six existing auditoriums in the near future.

The theater had a “grand reopening” ceremony May 18, 2007, featuring “Shrek the Third” and comments from the Mayor of Elk Grove Village, Craig Johnson and the President of Classic Cinemas, Willis Johnson.

Today, two of the auditoriums are equipped with digital projection and 3D. In November 2009, an additional 2-screens were added, making a total of 10.

Thanks for the site compliments.

From what I know (nothing is official yet), plans include moving the marquee on Arlington Heights Road closer to our entrance, adding two (maybe three) screens (possibly stadium seating, possibly with digital projection also, and maybe new party rooms underneath the stadium seating like they did at York Theatre). I would imagine we’d need more bathrooms and another drink station, since we could easily add at least 600 seats to the current capacity (which is about 1100 now). Another issue is parking…

The site looks really good now that you did a redesign. I look forward to the coverage of what is to happen when the construction begins.

I would love to see construction photos of the Elk Grove Theatre now that the new work is being done! Would also love to know what the plans are once everything is complete!

This is great news! I can’t wait to see yet another ‘new’ Elk Grove Theatre!

The lobby and renovated theaters look great (they all now have double-doors so you can’t hear the popcorn machines or loud people in the lobby or hallways).

EXPANDING AGAIN! 2 new screens, ALL-stadium seating, and reconstruction of theatres #1 and #2. Starts in April, should be done by November (then again, that was the schedule of the last expansion, but they didn’t finish until spring. We’ll see what happens).

The Elk Grove 10. Who would’ve imagined?

EXPANDING AGAIN! 2 new screens, ALL-stadium seating, and reconstruction of theatres #1 and #2. Starts in April, should be done by November (then again, that was the schedule of the last expansion, but they didn’t finish until spring. We’ll see what happens).

The Elk Grove 10. Who would’ve imagined?

Sounds exciting. That will be nice to have stadium seating for all the screens. Hope the plan goes through. Elk Grove is such a nice theater, and everytime it expands, it keeps getting better.

Here is part of a January 1975 article from the Daily Herald:

The Elk Grove Cinema is showing X-rated films again and village officials are trying to decide what to do about it. The current feature, “Flesh Gordon,” may violate a local anti-obscenity ordinance. Three Elk Grove Village policemen viewed the first screening of the movie Friday night and submitted their opinions to Police Chief Harry Jenkins. At least one patrolman is reported to have found the movie obscene, as defined by the ordinance passed last year. Jenkins is to review the findings of the policemen sent as “official viewers” and is expected today to take action on the advice of the village attorney. If “Flesh Gordon” is deemed unlawful, the theater may be closed.

Theater owner Walter Pancoe does not expect to be prevented from continuing to show the film billed as “An outrageous parody of yesterday’s superheroes” whose adventures were depicted in the Flash Gordon serials of the 1930s and 1940s. The movie began its run Friday night and is supposed to show through Thursday. “This movie has been very well-received at theaters all over,” Pancoe said. “There have been no objections raised in other areas and we don’t expect any battle here. We do not feel this picture violates the village ordinance.”

The anti-obscenity ordinance was rushed through by the village board in an emergency Sunday night meeting last January to prevent Pancoe from showing tho X-rated movie “The Devil in Miss Jones.” Pancoe contended he was losing money at the Grove Shopping Center theater by showing “family-type” movies exclusively.

Pancoe tried to show the film again last February and was successful for 10 days while a legal battle between him and the village raged. Contending that he was “coerced by village officials into not showing the film,” Pancoe filed suit against the village, seeking $250,000 in damages while the village sought injunctions to close the theater.

All court action was dropped when Pancoe agreed to stop showing “The Devil in Miss Jones” and return to less controversial fare. Pancoe is testing the village anti-obscenity law for the first time with “Flesh Gordon.”

1971 grand opening ad is in the photo section for this cinema.