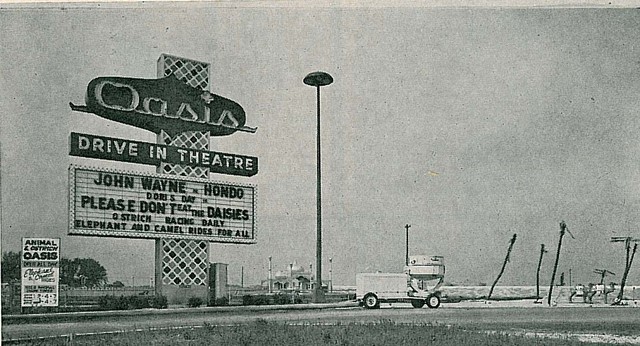 This single-screen drive-in opened September 16, 1960, not far from O'Hare Airport near the border of the suburbs of Des Plaines and Elk Grove Village. It had a Middle Eastern theme, as the name would imply, and originally had fake camels scattered around the drive-in. It’s marquee was a wonderfully kitschy blend of Hollywood’s version of the Arabian Nights and the Kennedy era.

Despite the constant noise from jets taking off and landing, the theater managed to survive until late-1973. The well-maintained marquee, along Elmhurst Road, which later advertised the mobile home park that replaced the drive-in, lasted until 2016, when it was torn down during a road-widening project.

This drive-in gave out free “Oasis” cigarettes! THAT RIGHT FREE! If you don’t belive me, have a look at the grand opened from September 16. 1960 that I uploaded at http://www.drive-ins.com/theater/iltoasi . The ad takes up 80% of a page. This drive-in closed due to jet noise from O'Hare.

A great write-up on the Oasis with fantastic pictures is is here. Brotman and Sherman built the 59-acre first-run drive-in at a cost of $550,000, and it featured a capacity of 1,546 cars and a 53'x122'screen with a special coating to make it 2.8 times brighter than a normal screen. The theater’s construction was delayed due to fears that a trailer park would be erected in the unincorporated area, straining Elk Grove School District 59 while not contributing taxes. The initial permit for rezoning from farming use had initially been denied, but later the Circuit Court ruled that the theater represented highest and best use of the property, adjacent to an airport and tollway with more trailer parks around, and ground was broken May 12, 1960. Although at that time the Brotmans insisted mobile units were not part of the theater development, the mobile home units were clearly a component of the project, although it started out as only 380 units on 40 adjacent acres (If you look at an aerial photo, they are the plots in a chevron pattern almost alongside the tollway).

The middle eastern theming of the Oasis was quite elaborate, an excellent expression of Brotman’s showman flair, extending from the mosque-styled, mushroom-domed box office with nine artificial palm trees, three fake camels, and two waterfalls to sand dunes painted on the fences. There were even real animals on the grounds early on, such as ostriches, camels, llamas, ponies, and elephants. The ostriches were used on a special race track as an added attraction. The carhop girls were outfitted in “miniature American legion costumes in summertime and full-length legion costumes in winter”, while ramp men wore desert garb. The theater also featured a concession stand/snack shop with four cafeteria-style lines and ample bottle warmers, as well as recreation and playground areas, with a miniature golf added a few years later. Flanking the concession stand were two innovative climate-controlled 70-seat viewing rooms with large picture windows, with the intention of accommodating those who did not wish to remain in their cars, or even to allow for patrons to be dropped off without cars. All this desert theming must have seemed quite ironic in the middle of frigid Illinois winters, when patrons had to rely on electric heaters or the indoor viewing rooms. One might consider the Oasis as an extension of the 1920s fantasy theaters with 1960s kitsch, well-exemplified by the fact that the Oasis theme was only suggested by the naming of the contemporary and quite nearby Des Plaines Tollway Oasis restaurant and gas station. Upon its opening in September 1960, featuring “On The Terrace” and “Murder, Inc”, it received an award from the National Association of Outdoor Theaters honoring it as “the most modern outdoor theater built in the last decade”. Besides the aforementioned features, it also featured an advanced projection system designed to reduce distortion from the head of the carbons, claiming to be the first in Illinois with this technology. To improve sight lines, the ground was double-ramped.

Jet noise may or may not have been a factor in the closure. On one hand, the site was located approximately 5,000 feet from the end of Runway 32R. O'Hare had become the focus of major development as the city’s new airport as early as 1955, but did not become the world’s busiest until 1962, after the theater had opened. However, 32R was pre-existing from O'Hare’s earlier use as an aircraft plant during the war, and the project to upgrade it into the jet runway (at the time, the world’s longest for civilian use) was begun well before the Drive-In, so noise must have been anticipated.

As a result of this geography, in a tragic footnote, the Oasis site would bear witness to the deadliest airplane crash in US history. Directly adjacent to the Oasis, to the south along Touhy was the former Ravenswood Airport, which closed July 31, 1962 – it must have been interesting for all parties having the O'Hare and Ravenswood traffic over the drive-in. On May 25, 1979 American Airlines Flight 191 crashed 31 seconds after takeoff, hitting the former airport’s hangar and killing two occupants as well as all 272 people onboard and throwing debris into the adjacent Touhy Mobile Home park. A few more seconds in the air and the crash would have occurred squarely in the Oasis mobile home park; a few degrees Northwest and the plane would have hit massive fuel tanks. Either outcome would have inevitably led to a greater loss of life on the ground. In a chilling irony, the Ravenswood Airport was at the time also being used to sell used aircraft parts; as a result, a sign pointing towards the wreckage bore the words “Airplane Parts, 320 W. Touhy”.

Here is a list of articles from the Daily Herald’s archives. They’re not accessible online, as far as I know:

Aerial from 1962..the other link was broken.

The Oasis sign was recently removed. victim of road widening for the I-90 interchange rebuild. 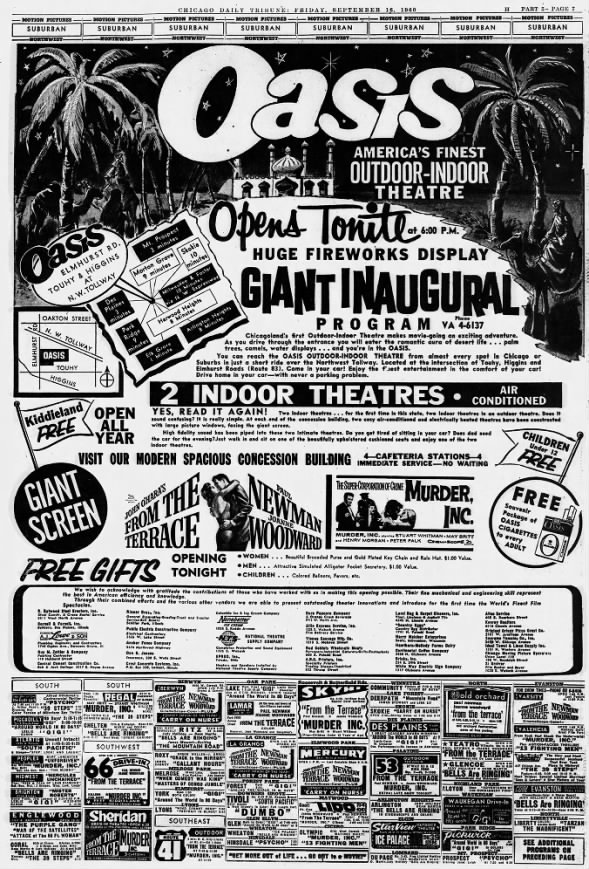