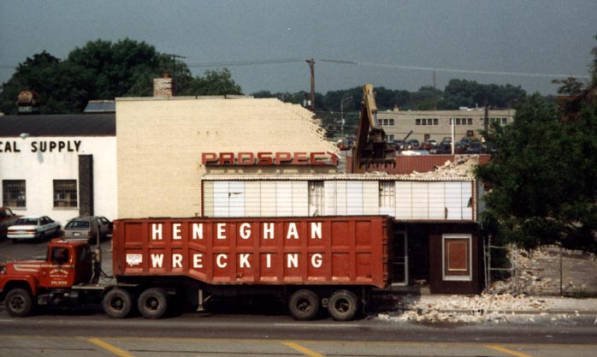 Small second run local movie theatre, the Prospect Theatre opened in 1951. It was closed in 1991 and torn down as part of a downtown revival initiative in 1999.

This is the new URL for the photo of the prospect’s demolition.

The Mount Prospect Cinema billymac refers to was located at Rand & Central. It was a triplex and is now the Bristol Court Banquet Hall, 828 East Rand Road.

Here is a March 1960 ad from the Arlington Daily Herald:
http://tinyurl.com/326kdz

I remember that the last movie to show there was Kindergarten Cop. April of 1991. It was there the last 2 weeks and I saw it the first week there. I remember that the woman who sold the tickets had red hair and I assume was part of the Rocky Horror that was done there fromt ime to time.

The Mt. Prospect theater mentioned previously was advertised in this June 1983 issue of the Daily Herald:
http://tinyurl.com/pjqvg3

FYI. Just noticed the 1984 picture shows “Prospect Theatre” spelled with the “RE”. Not sure if that means updating the header/bio or not for accuracy.

Apparently there is no CT page yet for the Mount Prospect Cinema at Rand Road & Central Road, whose ad is pictured in ken mc’s May 19th post.

Here is a December 1968 ad from the Daily Herald:
http://tinyurl.com/rbrkr8

Spelling should be changed from Theater to Theatre per the 1984 photo posted by Lost Memory on 05/16/09.

I was the Projectionist at this theater in the 80’s. The booth had Motiograph 35mm projectors, 20 minute reels with Motiograph carbon arc lamphouses. The sound system was made by Motiogaraph as well, and had mercury tubes. I had to show up at least 20 minutes early to warm them up, an hour in the winter (THE BOOTH WAS COLD!!!). The one speaker was an Altec “Voice of the Theater” model. The theater was located on 83 half a block south of Central across from the library, and was so close to the road I could hear and feel semi-trucks as they rumbled by. The woman with the red hair was named Helen and she was the manager there for many years, she was my friend. The owner was Leo Marubio, nice guy. The theater had a small curved stage that the screen sat on, and the back 8 rows were raised kind of like stadium seating today. We ran “The Rocky Horror Picture Show” for a while on the weekends and I would pay a friend of mine to run the booth as I dressed up as Frank-N-Furter and performed in front of the screen. True story, I’m weird.