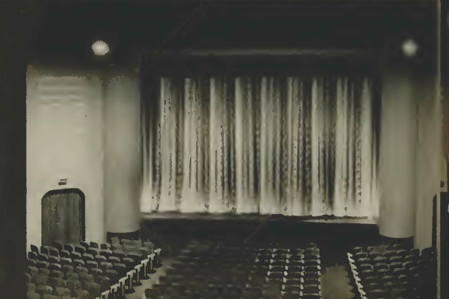 After decades as an entertainment destination of downtown Arlington Heights, the aging theater was closed in 1986, and demolished that same year. An eleven-story apartment building was built on the site in 1987.

A new Arlington Theater opened in 1999 at the Arlington Town Square, with six screens and stadium seating.

the updated link to the 1940s photo is View link

Which chain owns/operates the present Arlington?

I’m pretty sure they’re independent. The present theatres really should have their own listing, they’re not really at all related to the old one. Also, i’m 99% certain that the 1941 theatre was a completely new building. It opened on Jan 1, 1942. The blacklight murals in the auditorium originally were one of Zeus riding a chariot and a Zodiac chart of the heavens. The 1925 building itself replaced the earlier Arlington Hall on the same site, where movies and dances had been.

CHICAGO TRIBUNE ad for Friday, August 2, 1959 announced the opening of two theatres: The Coral Theatre, at 95th and Cicero, “Your Family Theatre,” and of the Arlington, downtown Arlington Height—-I’m assuming that new owners rehabed both and they had re-openings.

Arlington Heights Police Chief Carl H. Skoog reported a flurry of vandalism over the New Year holiday. Two homes had outside Christmas lights smashed or stolen, 2 cars had windows smashed and 1 a canvas top slashed, and a parking meter on Davis Street was knocked off its post and found on the sidewalk. Skoog also reported the theft of a car from the Arlington Theater parking lot and the theft of gas, an aerial and hub caps from other autos.

The smashed Christmas trees were at the residence of Warren Treutler, 1015 N. Forrest Ave., December 27. Two strings of lights were stolen from the Henry Paulson home at 637 S. Bristol Ave. on December 28. A cab belonging to William F. Langan, 1703 Brown St., Arlington Heights, was stolen from the theatre parking lot December 28 and recovered 3 days later near Roselle by sheriff’s police. It was burned out and a total loss.

Hub caps and an aerial were stolen from an auto owned by Arnold L. Weise December 28. The car was parked in front of his home at 710 Kensington. All the gas was siphoned out of the gas tank of a car belonging to Mrs. Arthur Findall, Des Plaines, on New Year’s Eve and vandals broke a windshield and cut a convertible top of a 1954 Ford belonging to Eileen Brown, also of Des Plaines, December 30. Another window was broken on a car parked in the downtown area of Arlington Heights. The owner, Mrs. Otto Bunge of Addison told police the incident occurred between 8 and 10 p.m. December 29. Kenneth Rapp, 308 W. Euclid, picked a parking meter up off the sidewalk on Davis Street Thursday and brought it into the police station.

Here is a March 1960 ad from the Arlington Daily Herald:
http://tinyurl.com/3db2mb

The April 25, 1942, issue of Boxoffice featured an article about the Arlington and a second theater built by Robert Lucas at the same time the Arlington was rebuilt, the Coral Theatre in Oak Lawn. The facades of the two were almost identical. The article attributes the design of the Coral to architect Frederick Stanton, and says the theater consultant David N. Sandine was design consultant on both projects. It doesn’t name the architect of the Arlington.

The Hanns Teichert Studio of Chicago did the decoration of both theaters. A second article about the Arlington, penned by Teichert, appears on later page of the same issue of Boxoffice.

In addition to its 1942 rebuilding, the Arlington was extensively remodeled and expanded in 1962. This article in Boxoffice of May 28 that year describes the project, which was to begin that summer.

American Classic Images has aphoto of the Arlington after the 60’s remodel.

“My Fair Lady” was the first and only time our family saw a film together; it was at the Arlington for over a year as we did not have a theater in Hoffman Estates until the following year. I could see the red neon sign for Arlington Park from my bedroom window at night. When they got to the Ascot Gavotte in the middle of the film I thought it took place at Arlington Park because of all the racetrack murals on the sidewalls of the theater interior. Still my favorite musical!

The links to the Boxoffice articles in my earlier comment are dead, but the articles are still available online for the time being. The web site is no longer easily navigable internally, so here are direct links to each page of the first 1942 article:

Here are links to the second 1942 article: