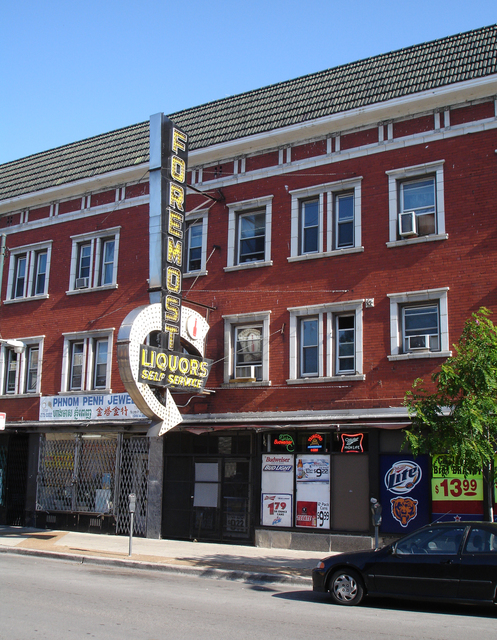 The Argmore Theatre was opened in 1913, and two years later, was acquired from its original independent operator by the Alfred Hamburger circuit. It was located in the Edgewater neighborhood, near the intersection of W. Argyle Street and N. Kenmore Avenue, hence the theatre’s name.

In 1922, the Gumbiner Brothers took over operation of the Argmore Theatre. Acquired by the Essaness circuit on October 7, 1933, it continued to be operated by that chain until closing in the early-1950’s.

The former theatre building was later was converted over to retail use. It currently functions as a liquor store with the auditorium used for storage.

This theater was also on the Gumbiner circuit. Chicago Tribune, Jan 8, 1922 pg H18. “LEASES ARGMORE THEATER – Abe Gumbiner has leased from Gustav Hochstadter, through Mark Levy & Bro., the Argmore theater, a 660 seat movie in the Argmore building at the northwest corner of Argyle and Kenmore, for a term of years from April 1, 1923. He then bought the lease of Applebaum & Kahn and is now operating theater. He also operates eight other theaters in Chicago and Hammond.”

I had absolutely no idea that Foremost Liquors was formally a theatre. I lived on Argyle just East of here from 1980-`83.
This is why I love Cinema Treasures. There is always something new to learn.

Aside from the many times I was in Foremost, my regular “Super Mercado” was kitty corner from that.
Foremost had a rather large tin ceiling as I recall.
The neighborhood West of Sheridan was changing rapidly in 1980. From fast food & halfway houses to predominately Vietnamese. The Argyle “L” stop was remodeled with an Asian themed roof. Some dubbed the area “New Chinatown”.

This is a tad off topic, but Foremost Liquors also utilized another classic building as their main office. Nearby only blocks away from the Argmore site, at the S/W corner of Broadway & Berwyn.
Their offices were on the second floor and were very art deco inside as of 1985 or so. There was also a giant statue of their smiling bottle/logo in their inner lobby. I believe Matanky Realty then took over the space.
Next door was briefly the 2nd home to former Sheridan Rd. & Berwyn niteclub Coconuts.

On a recent visit, the friendly manager showed us the auditorium which is now used as storage space for the liquor store.
You can see what remains on this picture :
View link

Vintage view of the Argmore (with a Fred and Ginger movie!) here: Argmore Theater.

I’m very surprised how much of the theater’s look remains, in the storage area for Foremost. I never would imagine it’s been preserved that well. And agree that’s what I love about this site, learning about buildings and sites that I never realized were once theaters.

Hey Yves! Very nice of the manager to show you the storage area where the main auditorium is! I’d like to get into the Bryn Mawr and see what’s still there!

Heck yes davidplomin, I agree that’d be another good one to see! Especially since I remember as a kid, seeing that theater abandoned for years and years. Dunno if I ever saw one movie there as a kid(was born in 82), before whenever it closed in the 1980s.

Here is the direct link to the 1936 IDOT photo that has the Argmore marquee. Previously posted by CompassRose in 2011, in the Uptown Chicago History link. In the below link you can both enlarge, zoom and navigate within the photo to better see the marquee.