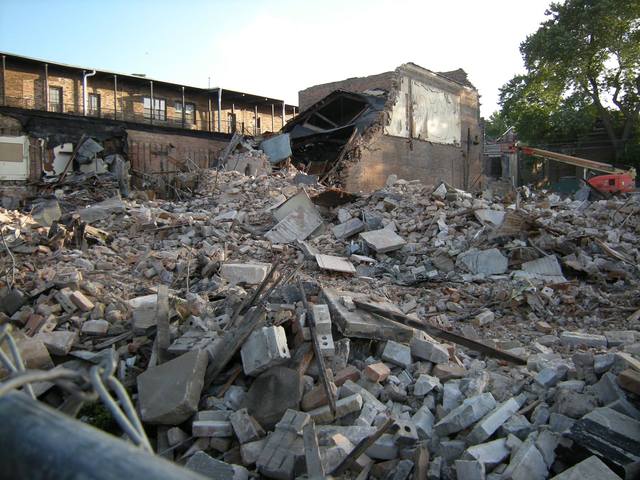 Converted into North Side Oldsmobile in 1921, a General Motors factory store. Auditorium converted to the chapel for Piser-Weinstein Funeral Home, connected to a newer structure next door in unknown year.

I worked at Fanning Cadillac-Buick-Sterling at 5201 N. Broadway, directly across the street from this when it was Piser-Weinstein’s chapel. During the 1980’s. I ofetn saw services let out, but never though to photos of the auditorium. I’m going to see if the demolition crew will let me get a few. Our building had been built as a Cadillac Motor Car Division factory store in 1926. Which became Bill Elsey Cadillac on 05/27/71, when GM sold all the factory stores. It then became Fanning Cadillac in 1974. We took on Buick in 1981 when Warren Buick (formerly Broadway Buick) closed at Hollywood & Broadway. Then got a Sterling franchise in 1987. It then sold to Sun Auto Group in 1990, and closed in 1992. This stretch of Broadway was known as the North side’s Motor Row.

I’ll be damned. I never knew that old funeral chapel had been a movie theater. It’s been sitting closed for a long time now. I hope they are finally going to do something with the property.

I’m going to go back next week. They are getting closer to the auditorium with the bulldozer, so I should be able to get a couple more photos.

Thanks to Mike Stillman for finding out that it became Furth Chapel in 1959, and closed for good in 2002 as Piser-Weinstein Menorah Chapel. It remained vacant since then. I was unable to get back to get auditorium photos.

One of our salesmen at Fanning Cadillac-Buick across the street, was notorious for running out to collisions in the intersection to hand out business cards in the `80’s.
The grill in the background later became Song’s Grill.

From the below Edgewater Historical Society link: (Unfortunately no photo as suggested)

In the last issue we asked What were the previous uses of the building on the Piser property at 5206 N. Broadway before it was a funeral home? What other buildings were on the site? What businesses were there before?

Answer: Surprisingly, the building was originally built as a movie theatre, first named The Foster, then renamed The Broadway sometime between January and March, 1914. See the photo below. The permit was issued November 1909; the owner was H. Cohlgraff, and the architect was Perkins & Hamilton (a partnership of Dwight Perkins and John L. Hamilton. Perkins was at the time Chief Architect for the Chicago Board of Education. He designed both the Hayt and Trumbull school buildings.)

As early as April, 1921, the building began its new life as an auto showroom. It had a succession of different dealerships: an April 26, 1921, Chicago Tribune ad showed it as the home of the North Side Oldsmobile Co. It later became the home of the Kailer-Youngquist dealership. Sometime in February, 1929, Kailer-Youngquist moved to 5031 Broadway and the building became the home of a Cadillac dealership, until the company moved across the street to a new building at the northeast corner of Foster and Broadway. Finally, in 1932, the building was re-purposed again as a funeral home for the Piser organization. The funeral home closed in 2005 or 2006, and it remained vacant until May, 2014, when demolition began.

Circa 1910 postcard image added credit & courtesy LeRoy Blommaert, Edgewater Historical Society. You can see the entire original facade was removed, as the later Piser facade is set back from the building next door to the South.