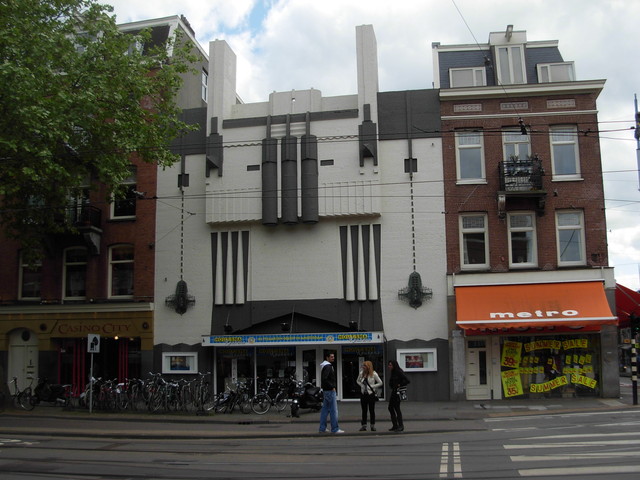 Located on the Ceintuurbaan in Amsterdam, this former cinema built in 1920-1921, is one of the few cinemas in Amsterdam that has a classic Art Deco facade.

Designed by architect Willem Noorlander in the Amsterdam School architecture style, it was one of the first buildings in Amsterdam to be constructed with re-enforced concrete. This allowed for a large overhanging balcony in the auditorium, without supporting beams in the seating area below.

In 1936 the facade was somewhat changed and modernized to suit the look of more modern theatres that were built in Amsterdam. Some of the lighting decoration was changed with long neon tube decorations.

Exhibitor was J.J. Otter, who used to live on the location of the theatre. Next to it, at Ceintuurbaan 280, was a small theatre, the Ceintuurbioscoop which first opened in February 1913. This was closed when the adjacent new Ceintuurtheater was built and is now in retail use. The architect of the theatre also lived in the same street (number 340), and had to move when another theatre, the Rialto was built there, around the same time.

The theatre closed on 30th December 1976, and now houses a kitchen store.

Locals nicknamed the theatre “Stinky” from smell of the stink bombs regularly set off by visiting rascals.

My May 2008 photo, with Ken Roe comment as to former cinema next door which is pictured in the photo
View link
Ken’s comment:
The building next door, now occupied by the Metro shop at #280 Ceintuurbaan, was originally the Ceintuurbioscoop. It opened on 3rd February 1913 and had seating for 154. Closed when the new Ceintuur Cinema opened next door, it became a cafe and lunchroom.

My photo of a different detail on the theater that depicted in Ken’s photo above:
View link

The above mentioned photograph is black&white, but not vintage. It was taken in April 2006.