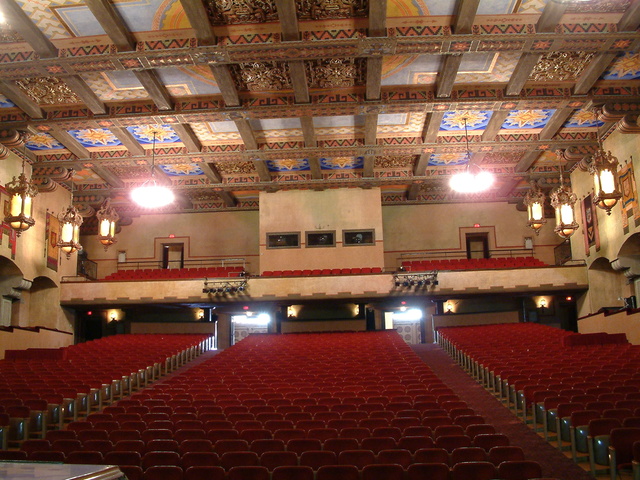 Opened as the Mission Playhouse on March 5, 1927. It was built by John Steven McGroaty to house his “Mission Play” which had become so popular it outgrew its previous location. The “Mission Play” told the story of early California history with a cast of 150 accompanied by a full orchestra and an Aeolian 2 manual 21 ranks organ. Seating is provided mainly on the orchestra floor, with a small balcony at the rear which has 176 seats. Along the side walls are a series of boxes, which were built with the intention of being able to accommodate a car in each one, so that the occupants could sit in their car to see the performance. In the end this feature was never utilised and they became conventional loge seated boxes. The proscenium is 53ft wide and 30ft high, the stage measures 92ft wide x 47ft deep and contains rigging for 40 lines to support scenery. The “Mission Play” ran until 1932 clocking up 3,198 performances.

On September 1, 1932 it became a full-time movie theatre screening James Cagney in “Winner Take All” & Monte Collins in “It’s a Cinch”. It is said that during the wartime housing shortage that its dressing rooms were used as apartments. It closed as a movie theatre in 1945.

In October 1987 the Whittier Narrows earthquake damaged the building and on the 4th October 1987 aftershock, one of the bell towers collapsed into the lobby and part of the façade came down, immediately closing the theatre down. Repairs were speedily carried out and it reopened February 12, 1988 with a production of “42nd Street”. The building was also shaken about in 28th June 1991 when the Sierra Madre earthquake struck, but little damage was done.

Today it is used for a variety of the performing arts, silent movies with organ accompaniment and is available for rental. It was re-named San Gabriel Mission Playhouse in 2008.

The nearby San Gabriel Mission, dating back to the early-1800’s, is on the National Register of Historic Places.

I lived within a couple of miles of the San Gabriel Civic most of my life, and visited it many times, and had no idea that it had ever been used as a regular movie theater. By the time I was born, it had become the Civic Auditorium, and only showed movies once in a while, usually travelogues or special features such as Bruce Brown’s surfing movies. It really is a splendid building. I’m glad to see that they repaired the severe damage it suffered in the Whittler Narrows earthquake, rather than just demolishing it, as was the fate of many other historic buildings in the area.

For the record, this theater was designed by Arthur Burnett Benton (1858-1927) for the poet-playright, John Steven McGoarty (Benton also designed McGroarty’s home in the Tujunga area of Los Angeles.)and was intended as a permanent venue for the writer’s “Mission Play”. Benton is best known for his design of the first 2 phases of the National Historic Landmark “Mission Inn”, in Riverside, CA. One of his specialties was church buildings. This building was one of his very last commissions. The style, by the way, is “Mission Revival”, which was a specialty of Mr. Benton.

In reality, the Wurlitzer organ in the San Gabriel Civic Auditorium is a 3 manual now 17 rank instrument. This organ was never of 4 manuals and 21 ranks. The Brooklyn Albee organ was known as a style 260-special. The organ was originally 16 ranks—15-ranks in the two chambers at the front of the auditorium and a single rank Vox Humana “Echo Organ” at the back of the balcony. When the organ was dedicated in San Gabe in 1971 or ‘72, the “Echo Organ” concept had been done away with and the parts from the Echo organ were installed with the main body of the instrument at the front of the San Gabe Auditorium. I have climbed about the insides of this organ many times through the years and know it well.

This Wurlitzer was not the first pipe organ for the SGVA. When the auditorium first opened, a 2 manual 21-rank Aeolian residence style organ was installed and remained in the auditorium until the Wurlitzer was brought in from NY. Late local LA area organist Paul Beaver bought the Aeolian pipe organ, but it was never installed by Mr. Beaver due to his death. I do not know what became of the Aeolian on Mr. Beaver’s death circa 1974.

Also, a name is missing from “lostmemory’s” list above; Bruce Skovmand did yeoman’s duty to get the organ lift installed and operating for the grand opening of the organ in either 1971 or 72.

Point of fact, the facade of the SGCA was designed to resemble the San Antonio Mission in rural southern Monterey County. This was one of the 21 Spanish Missions in California built in the late 1700s to early 1800s.

Here is a photo of the Mission Playhouse from September, 1940, during the time it was operating as a movie theatre.

If you want to see this beautiful theater in action, visit the Playhouse on Sun 25th Oct at 2.30pm for a screening of the 1925 silent classic “Phantom of the Opera” starring Lon Chaney snr. Live music on the beautifully restored Wurlitzer. More info on 888-528-6722.

Arthur Burnett Benton drew the original plans for this Mission Playhouse in 1921, and the cornerstone was laid in 1923, but the progress of construction was slow and the building was not completed until 1927, when it opened on March 5.

I’ve come across several sources (a scholarly tome by William Deverell, published by the University of California, for one) claiming that, by 1926, Benton had become too ill (he died in 1927) to complete the project, and it was taken over by William J. Dodd and the firm Dodd & Richards (architects of the Kinema Theatre in downtown Los Angeles, later to become the Fox Criterion.)

Dodd is said to have substantially altered the design, so he should probably be credited along with Benton as the architect. Dodd & Richards also designed a 1929 addition to the playhouse, a project that added a curio shop and exhibition gallery.

Here is a link to a video I made for a friends graduation ceremony a few weeks ago. Shows the exterior, forecourt and interior of the San Gabriel Mission Playhouse.