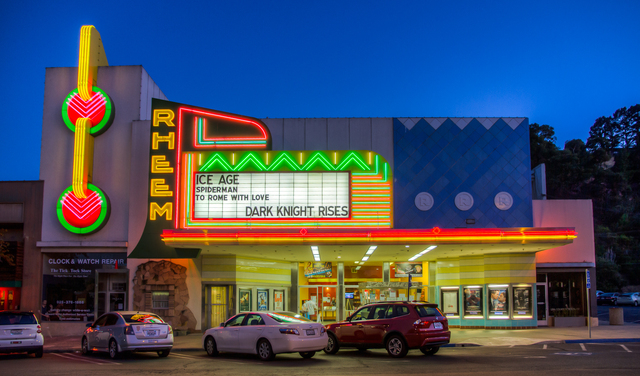 Built in 1957, the Rheem Theatre was originally a one screen, but during its remodeling in the 1990’s was split into four. The renovation did not ruin its original look.

The Rheem Theatre was closed on April 15, 2010, but it was taken over by the California Independent Film Festival Association and re-opened in September 2010 as the New Rheem Theatre. By 2017 it was renamed Rheem Theatre and was operated by the owners of the Orinda Theatre. It was closed January 7, 2018 and reopened in fall of 2018. In September 2019 it was taken over by Cinema West and after refurbishment it reopened December 19, 2019

Oh – addendum. So, the listing for this theater should say “Open”. Check out http://www.thenewrheemtheatre.com/ for the website.

So glad to see this GEM is open again!

Here are is a link to picture that shows the lobby’s and concession stands,Autoriums a really nice cinema! GLAD to see this cinema back open!. http://www.cinematour.com/tour/us/7180.html

This theater was built by the Rheem family, of the famous Rheem Water Heater Company. I think that every home back then had one They made a fortune and they are still in business. When we went there for the first time, we noticed attached onto the back of the Orinda Theater was a big neon sign in green. It said “Rheem Theater – 5 miles” and had a green arrow showing you the way, you couldn’t miss it you could see it from the freeway. It was a nice drive, scenic like you’re in the country, 2 lane road to Rheem Valley. What I liked about the Rheem was the seating. It was very comfortable and gave you plenty of room. Haven’t been there in decades, glad to see it is still open

The Rheem Theatre will be closing again, with its final showings scheduled for Sunday, January 7, according to this article from today’s East Bay Times. The theater will not be dismantled, for now, in hopes that it can be reopened in the future.

Based on the picture showing VENOM and FIRST MAN on the marquee, is it safe to assume this theater has reopened?

Purchased by Cinema West in 2019 and plans to re-open by the end of the year with several upgrades.

The Rheem reopened yesterday under Cinema West with “Star Wars: The Rise of Skywalker.” I had not visited under previous owners/operators but enjoyed myself and will return as I am able. The staff members I spoke to were very happy to welcome us to the theatre.

The marquee and terrazzo entryway with external ticket booth (which appeared configured for use but was not open this evening) make for an impressive entry. The murals in the main auditorium, which I heard might be at risk in the renovations, were resplendent, and the electric recliners comfortable if not exceptional. Picture and sound also very good: at times the sound seemed to shake my body and chair, which was fine for a star war but might annoy during a different kind of movie. It’s a “giant screen,” wall to wall, so no masking or curtains drawn before and after the show.

Food was fine, the standard fare (popcorn, candy, hot dogs, nachos, pretzels) with a few surprises (well seasoned wedge French fries) and beer, wine, and frozen cocktails to come soon. Prices were comparable to similar theatres but I might try something in the adjacent shopping center on my next visit. There were a few nice places in the lobby to rest a while and start nibbling before entering the auditorium, although signs cautioned that the well preserved phone booths in one corner were for display only.

One last touch was a series of photos of stars in the hallway between auditorium entrances. Some usual suspects (Mickey Rooney and Margaret O’Brien) and some one sees less of (Cloris Leachman). While perhaps the theatre lacks the grandeur of some other historic houses, I found it warm, inviting, and charming. And I’ll confess that I enjoyed having a fancy seat to play with for a change! After witnessing the last night at the Guild in Menlo Park a few months ago, I was glad to witness the first night at the reopened Rheem, and hope this is the first of more to come.