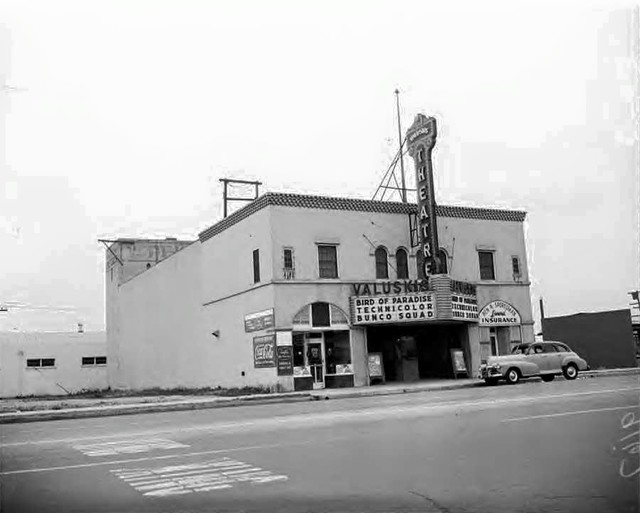 The Valuskis Theatre was opened September 18, 1928. This theatre on Beach Boulevard became a Pussycat Theatre in the late-1960’s after showing Spanish language films. Often a target for police raids and community protest, it was shuttered in the early-1990’s.

TYPO ABOVE: of course I meant; Do a Google search on “Valuskis Theater” to find the cached page.

Valuskis should be put in the aka line. Here is an article dated ¼/74 about the Pussycat Theater:

Claiming she has been “offended and outraged” by the operation of the Pussycat Theatre in Buena Park, Mrs. Donna Bagley decided Thursday it should be closed â€" and she filed suit under the state’s Red Light Abatement Act. Her action in Santa Ana Superior Court is the first under the Red Light Abatement Act to be brought by a private citizen, although Dist. Atty. Cecil Hicks has used it with some success against bars and restaurants featuring nude entertainment.

Mrs. Bagley, who lives at 5962 Stanton Ave., Buena Park, contended in her petition she has been “significantly offended, outraged and has suffered shame, embarrassment and emotional distress as a result of the public scandal caused by the continuous and daily presence, advertisement and public exhibition of patent hard-core pornography” at the Pussycat Theatre, 6177 Beach Blvd. She said the theater is close to the area where she resides and works and that it attracts “criminal elements, undesirables, deviates and dropouts” and lures “immoral persons” into the area.

Her suit against Pussycat Theatre also names Vincent Miranda of Hollywood, its operator; and Walnut Properties, Inc., believed to be the owners of the building which for years was Buena Park’s only theater. However, the theater was converted to X-rated films only a short time ago, and since then has had a running battle with Buena Park police who have seized dozens of prints of what they insisted were hard-core pornography. Their last raids shut down a highly advertised showing of the moneymaking “Deep Throat.”

Santa Ana Superior Court Judge Mark Soden set Jan. 21 as date for hearing arguments on an order to show cause why an injunction should not be issued against the theater. This is a civil proceeding, first drawn into law in California to cope with the notorious Barbary Coast in San Francisco. Its major penalty is closure of â€œplaces of assignationâ€ and a court order to auction the assets of the places involved. The Orange County district attorney used the act in eight prosecutions. He won them all and most assets have already been sold from the various bars which were closed. This is the first against a theater.

There’s a cover article in today’s San Diego Reader, detailing the histories of all the downtown theaters once run by Vince Miranda, at one time co-owner of California’s Pussycat Theatre chain. This is one of the theaters chronicled in the piece, which is built from a series of email interviews with Cinema Treasures contribs Dan Whitehead and Tim David (David is Miranda’s godson). Unfortunately, the online version doesn’t have any of the great photos and graphics seen in the printed version – I wrote the piece and will probably put scans of the graphics on my own webpage before much longer, after the next issue comes out. Here’s a link to the article on the Reader site:

This is our second major feature on southern CA theaters in about a year (the other, “Field Of Screens,” is just on San Diego drive-ins and can be found on the Reader site with the search bar). If anyone here likes the article(s) and would like to encourage the publisher to greenlight more, feel free to leave your thoughts about the piece in the comment section after article. The paper really pays attention to reader comments!
http://www.sdreader.com/ed/cover/

If the theater was shuttered in the early 90s then it must have been showing movies in the car lot that’s been there since the 80s.

BUENA PARK-The Pussycat Theater resumed showing sex films Wednesday night after vice officers made their 14th arrest and seizure of films there this year. The latest raid was launched Tuesday night during the showing of “Beyond the Commission’s Report on Obscenity and Pornography”.

Officers seized a print of the film, advertising posters and schedules of its showing. They also arrested the manager, Edward Lee Bailey, 28, of Los Angeles.

As the Valuskis Theatre in 1951.
Photo courtesy of the USC digital archives, from the now dead link.

It was May 19, 1951 when Patty was kidnapped by Henry Ford McCracken. The film playing that day was “The Bird of Paradise” (as shown on the marquee in the photo added). And, it just so happened that that film was about a kidnapping. McCracken was a sexual psychopath. “ In 1946, his concerned mother petitioned the Orange County Superior Court to have him committed to a mental hospital. His behavior and record as a serial child sex offender, however, failed to impress medical examiners who said he had "mild schizophrenia with anxiety neurosis but can distinguish between right and wrong.” THEY WERE WRONG! “After his "mild schizophrenia” diagnosis, McCracken moved from Orange County to Michigan, where his string of child sex offenses continued. In the fall of 1950, after nine arrests, Detroit Police prepared documents to have him permanently committed to a mental institution. Before the documents were filed, McCracken fled back to Orange County. A few weeks later, he was arrested in Santa Ana for failing to register as a sex offender. He served a six-month jail sentence. On May 6, 1951, he was on the streets again.“ "McCracken immediately gravitated to an auto court cottage on Grand Ave. down the street from the Valuski’s Theater where he took up residence. (Today that is a vacant lot right next to the Coyote Creek flood control channel.) He worked nights entertaining at the nearby White Elephant Cafe (that was on Beach Blvd. and Commonwealth where the Bank of America branch is today). Just 12 days after his release from the Santa Ana Jail, he took an empty seat at a Saturday matinee, next to Patty Jean Hull.” In later years before Mr. Valuski sold the theater he had hired Patty’s brothers, Jack and Jim Hull, to be projectionists in the theater. Many local people still patronized the theater but because it was old fashioned and outmoded Mr. Valuski sold out and retired that theater to new owners.

I grew up in nearby La Habra, and remember much of friends, especially guy friends spoke about rumors surrounding this theater even about the 1951 kidnapping, the theater itself was falling apart much of the theater suffered cracks in its outside wall and parapet chipped and crack during the Oct 1st 1987 Whittier Narrows Earthquake. Along with a window that also broke during that quake, that was not documented.

My Grandparents operated the Grand Theatre in the late 60’s through the mid 70’s. At first they showed “regular” movies but when business slowed they switched to “Adult” themes. For a while they also showed Spanish language films but the infrastructure took such a beating they had to stop. My dad and his brother (my uncle) took turns operating the projectors while my Grandmother sold tickets and concessions in the lobby. I have many memories sitting in the projector booth with my dad as well as in the ticket booth with my grandmother while she sold admission and watched Roller Derby on her 8 inch black and white TV. After much harassment by by the City of Buena Park they finally sold out to the Pussy Cat theater chain.