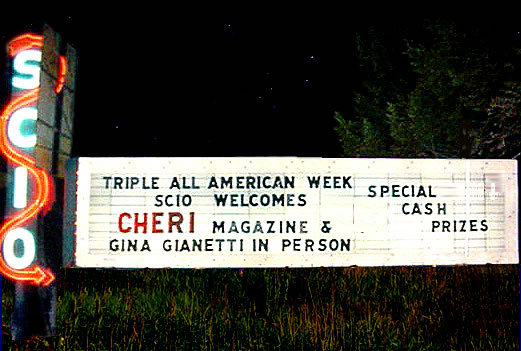 Opened in 1953, under Arthur and Roger Robinson, who also operated the Ypsi-Ann Drive-In and Willow Drive-In, the Scio Drive-In originally could accomodate about 400 cars, and had a single 65-foot screen. In 1967, the General Cinema Corporation took over the Scio Drive-In.

Seven years later, under VIP Theatres, the Scio Drive-In switched to adult films, which caused controversy because area residents complained that the racy fare could be seen from both Jackson Road and the nearby I-94 expressway. However, not only did the theatre remain in operation (despite briefly being forced to close by the authorities in 1975), an adult bookstore was built on the drive-in’s property, as well. By the late-1970’s, the drive-in was expanded to accomodate more than 700 cars.

The Scio Drive-In closed in 1985, and was demolished in 1991. The site remains vacant today.

The timeline here says the Scio turned into an adult theater in 1974, which I think is incorrect…I went there several times when it was still a regular drive-in, and I didn’t start driving till 1978. I remember the conversion to an adult theater, and the controversy over the visibility of the screen (which happened pretty much immediately), but to the best of my recollection that didn’t occur before 1980.

Miss the wet T shirt nights which occured on top of the concessions. Sure drew a crowd when they had one.

Why the name Scio?