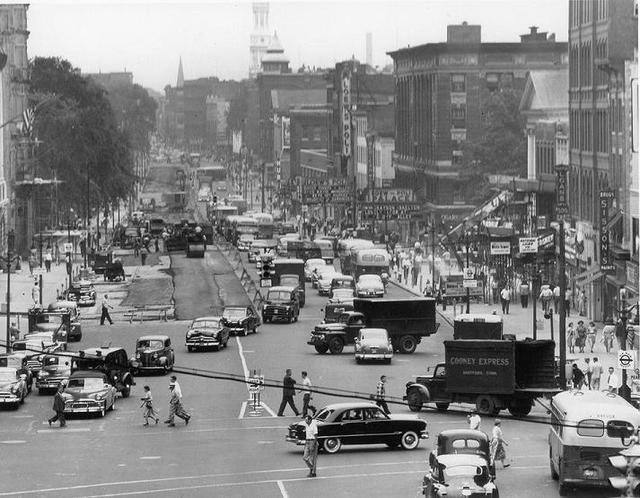 The Capitol Theatre was opened on August 28, 1920 with George M. Cohen heading a vaudeville bill which also included Eddie Foy & his family. Built on the site of the Coliseum and later 1903 built Poli Theatre, it was designed by Thomas W. Lamb. It was equipped with an organ (make unknown). It was later known as the Fox-Poli Theatre before finally becoming the Loew’s Poli Theatre. Located on Main Street, this was perhaps the most elegant theatre in Hartford. Loew’s Poli Theatre was closed on September 6, 1964.

It was demolished, together with its near neighbor Loew’s Poli Palace Theatre. The site is now occupied by Bushnell Plaza.

I’ve been told that my great-grandfather was the stage manager of this theater, I think when the vaudeville circut was still passing through.

An interesting item in the November 8, 1913, issue of the trade journal The Moving Picture World says that construction of the foundations for a new Poli theater at Main and Gold streets in Hartford had begun. If that was not the exact location of the Loew’s Poli then it must have been very close. The item said that construction was being rushed on the project, in hope that the house could be opened in January, 1914. Architect for the project was Ferdinand Von Beren of the New Haven firm Brown & Von Beren, who did other work for the Poli chain.

I’ve found no later references to this project in the trade publications. I’m wondering if Loew’s Poli was later built on the foundations begun in 1913? Or did something else get built there, or nothing at all? Maybe the city decided it needed part of the site for a street widening project or something of that sort, and the theater project was halted? Perhaps Mr. Poli ran into financial difficulties and the project had to be delayed? A mystery, anyway. Does anybody know the answer?

This photograph of the Fox-Poli Capitol Theatre was taken in 1929 by George Mann of the comedy dance team, Barto and Mann.

Thanks again for the photo Brad.

In September of 2010, Joe Vogel referred to an interesting item in the November 8, 1913 issue of the trade journal The Moving Picture World. After 3yrs.8mos., I thought someone would have an answer. I guess not?

The Capitol was a replacement for Poli’s Theatre, which opened in 1903 with about 2,200 seats and used portions of the Coliseum, a bankrupted indoor arena built in 1899. S.Z. Poli purchased adjacent land to create a Main Street entrance for his first Hartford outlet. Vaudeville was the main attraction, but movies were gradually added as the medium developed. Poli’s profits were enough to build the nearby Palace Theatre, which opened in 1914 and made the showman dominant on Main Street. By the end of the decade, the older theatre was becoming obsolete, so Poli decided to replace it with the larger and grander Capitol Theatre, which opened in August, 1920, at the same location. Poli’s Theatre was almost totally demolished, except for part of a side wall and brickwork that dated back to the original Coliseum.