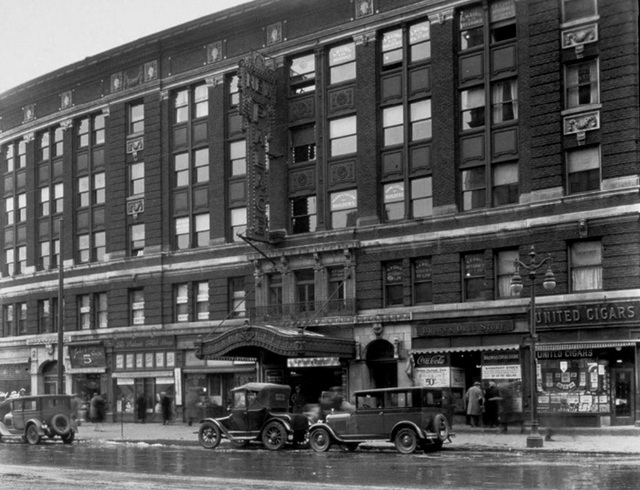 Located almost next to its sister theater the Loew’s Poli Theater, the Loew’s Poli Palace Theater opened on May 25, 1914 with “Tess of the Storm Country” on screen and six acts of vaudeville on stage. It was quite obvious that the interior had been modified. Where the side box seats were once located, some type of dark filler, perhaps painted plywood, was used.

The auditorium was very plain, making one wonder just how much of the original decor was not retained. The seats had white cloth covers.

I remember commenting about it to my mother about it and she said that many high class theaters used to cover their seats in the summer because all the ladies wore white. This prevented their attire from getting soiled, at least visibly.

It was demolished in September 1964 together with its near neighbor the Low’s Poli Theater and the site is now occupied by Bushnell Plaza.

Would love to see a photo(s) of this former theatre in Hartford.

When I attended this theater in the early 50’s, as I did all of the downtown Hartford theaters, this and the Loews next door, were truly very ornate. During intermissions, when all the lights were on, I would look up at the huge chandelier, painted ceiling and ornate sculpture and think that I really was in a palace. The Allyn, Loews and the Loews Palace were the first to install air conditioning. The E.M. Loew’s that was next to the Allyn, never did get refridgerated. It was still packed in the summer time. They used big fans and opened all of the doors.

A period photo of the theatre when it was the (New) Palace Theatre can be seen in the “Images of America” book Hartford, Volume I, page 61. The marquee displays the 1929 film The Cockeyed World.

I would love to see the photos that are in the “Images of America” for the Palace and other Hartford theaters but not having the book, I would ask that the photos that Mr. DeLuca mentions, be scanned and posted along with your comments to the ‘ADD PHOTO’ link at the top of this page.

I will attempt to scan and post them as links to a photo server in the next few days. The add-a-photo function on this website doesn’t work, and in any event would allow for only one photo per theatre page.

When I came to Hartford in the fall of 1961 to begin Trinity, there were many theatres. Now there are none. There were also unique shops and restaurants – not the current yuppie-duppie types serving 23 types of quiche or bland chains, but individually owned establishments. Probably they, including the theatres, couldn’t pass the ADA-mandated “handicap access” requirements or stringent fire codes, but downtown was a wonderland of REAL diversity, reminiscent of Petulia Clarks’s “Downtown.”

DEMOLISHED after September 1964 for the construction of Bushnell Plaza. It was torn down along with its sister Loew’s Poli Theatre next to it.