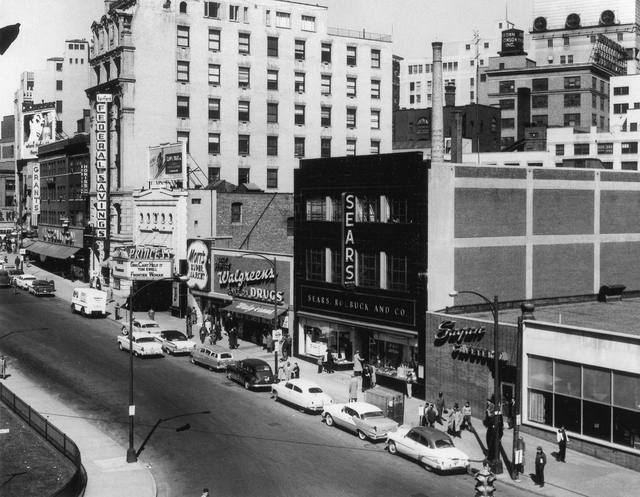 Part of the entrance to the theatre along with a billboard for the 1930 Marion Davies film Not So Dumb can be seen on page 23 of the volume I just mentioned in my previous post above. Also on that page is another photo of the Princess in 1930, a long shot of the area buildings. The billboard here is for the 1930 Doorway to Hell.

And yet two more on page 25 of the above volume. Two photos of the Regal in the foreground and the Princess in the background. In one you can see the marquee display on the Princess as the 1946 The Dark Corner.

Was this theater next to the Regal? I recall back in the ‘50’s coming into the Northern end and seeing 2 boarded up theaters across from a large tire store. Believe it was Goodyear. I’ve been racking my brain to recall these theaters.
posted by AlLarkin on Dec 12, 2005 at 1:41pm

I don’t know when they shut down, but I know that I went to the Princess at least until 1954. The Regal and the Princess were on State Street, but were across from a plaza and the Old State House, not a tire store. The old pictures as shown on Hogriver.org, show the Lowes Poli and the Fox Poli. At least by 1952, they were re-named the Lowes and the Lowes Palace and were almost next to each other on Main Street, south of State Street. I learned later that E.M.Lowes theater wasn’t connected to the Lowes theater chain. Poli is in a mausoleum in the West Haven Cemetery about 200 feet from my fathers grave.

Found a pic of it in the Courant’s opinion section on bringing back a trolley.

Wurlitzer II/7 organ, opus 1651, style “E-X” was installed in the Princess in October 1927. The organ seems to have been removed in 1964 and moved to a Methodist church in Auburn Maine.

Architected by L. D. Bayley of Hartford and opened in 1913.