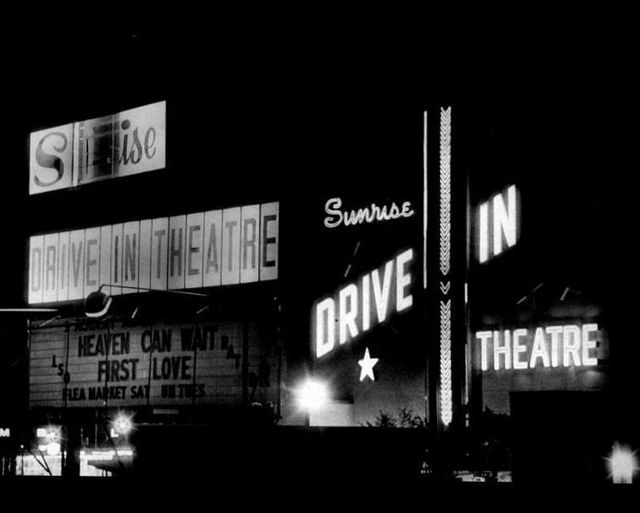 This was one of Long Island’s most popular drive in theaters because it was right over the city line. Cars would line up for miles to see first run double and sometimes triple features.

It was the first drive-in theatre to open in New York State, opening on August 10, 1938 with Jimmy Durante in “Start Cheering”. The Sunrise Drive-In later had a huge curved screen and the side that faced the street was covered in gaudy neon. It also had a big play park and concession stand. By 1955 it was being operated by Michael Redstone. By 1957 it was operated by Liggett-Florin Booking Service. The Sunrise Drive-In was closed on May 17, 1979 and torn down. Redstone built the 6-screen Sunrise Multiplex Cinemas on the site.

Introductory comments up top might be updated to reflect exact opening date of August 10, 1938, and correct time of closure and demolition to 1979, sometime after the run of “The Exorcist” re-release as detailed above by KingBiscuits on January 16, 2010.

enjoyed some of the great stories,especially the one about car-speakers.

I remember seeing “Night of the living Dead” there. Had to be 1969. Also “Rocky”, “Let’s scare Jessica to death”, The Planet of the Apes. and “The new Centurions”. I believe my brother may have hidden in the trunk one time to reduce costs. Had a nice Playground there for us kiddies. That theater was featured in the Movie “The Lords of Flatbush” and I would not be surprised if it was actually shown there as well. Then they had the Flea Market there also.

Pic of the dive-in site today in photos.

Pic of the first attraction “Start Cheering” posted in photos. This picture had opened at the Rialto in Times Square on March 16, 1938. The NY Times said “Unsinkably buoyed by the comical intensity of Jimmy Durante, "Start Cheering,” at the Rialto, turns out to be one of the funniest of the year’s admittedly minor productions…

Many of the popular outdoor (and beat up old indoor) theaters got together in the late 50’s and formed their own distribution company called “Crown International” I watched as many of those trashy old films that I could. I loved those ‘B" movies and the cheaper the better! Such as; “The Baby Sitter”,“The Fantastic Plastic Machine”, “Chain Gang Women”, A bunch of “Motorcycle flicks”, and “The Sister-In-Law” comes to mind. That company (Crown Int) got big for awhile and had a long list of cool “budget” movies that were star-less but entertaining to watch and then easily forgotten. The film content rating system was still new in 1968-to'70 and “R” meant naked breast and bare butt scenes, and “X” meant full frontal nudity. “Triple XXX” was rare and not generally seen at drive ins, but yes! I did get to see a couple XXX fils like “Sweet Sweetback badassss song” I used to sneak in through one of the many fence holes in the rear of the Drive-In and sat on the ground with my back up against the fence. The fence was just 30 feet beyond the last row of cars,& in the dark. Most of the time we had a six-pack each of Rheingold beer, or a bottle of cheap wine like Boone’s Farm fruit flavors, or (ichhhhkkk) pints of Port wine. I ate hot dogs from the stand, drank beer, and partied 'til theater closing time (about 1:00am) on those hot summer nights along with all my Rosedale Queen’s friends.I look back and have fond memories thanks to the film company “Crown International!”

Just added another 8/16/38 photo front & back, which states that the Sunrise was “New York State’s first open air drive-in theater”. Something that should likely be added to the Overview.

Please update, theatre closed May 17, 1979 with it’s final features The Exorcist and The Gauntlet. Final features ad in photos section