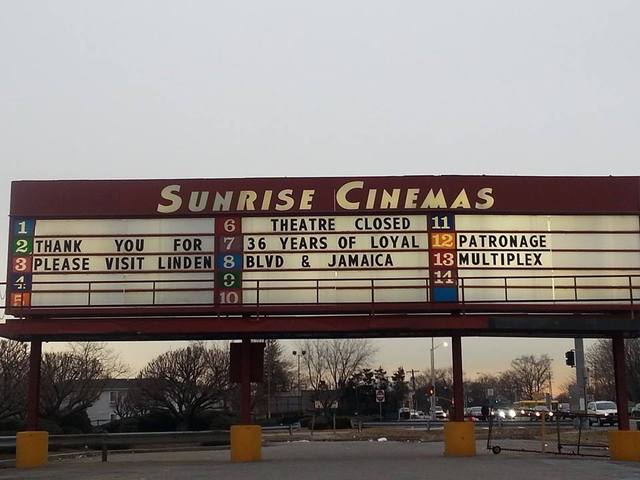 This multiplex was built on the site of the old Sunrise Drive-In. When it opened on December 7, 1979, it had six screens (each with 600-seats) which was quite radical back then. Each theatre was enormous and very well appointed. The theaters were setup in along a long corridor. On June 12, 1981 two more screens, each with 550-seats were built and opened alongside the original theatre. Over the years other screens were divided making a final total of 14-screens by October 16, 1987.

For a while (early to mid-1980’s), this was THE place to see a movie if you lived on the western south shore of Nassau County on Long Island. The first movie I saw here was the first “Star Trek” movie. Also saw “Airplane”, “Starman”, as well as countless others. But the theatre’s proximity to some less than desirable neighborhoods just over the Queens line in NYC began to have it’s effect on it.

The last movie I saw here was Scorcese’s “After Hours” in 1985. The Sunrise Multiplex had this late night movie which started at or around 12:30 or so. So that was the time we saw this. We sat through the movie and as we were leaving, the place was understandably deserted. What we did notice was that a large plate glass window was gone. For some reason, we didn’t think anything of it. Well, the next day, we found out that while we were watching “After Hours” a full scale riot had occurred involving patrons watching a movie called “Krush Groove”. In addition to guns being displayed, a patron was thrown through the plate glass window. I never saw a movie there again.

In 1990, at least one person was killed during a gun battle which occurred during a showing of “The Godfather, Part III”. I was not surprised.

paktype, was it in 70mm dolby stereo?

On my first visit soon after it opened my friend’s car battery was stolen.

In the 1980’s the parking lot was the local police precinct’s hot spot for auto theft.

In the 1990’s there were several shootings inside the theaters.

This has to be one of the most dangerous theaters to go to…up there with clifton commons.

Well, since this theater has been closed over three years, and was torn down, I don’t think that it is still one of the most dangerous theaters to go to.

I don’t think there were several shootings in the 1990s, just one highly publicized fracas during Godfather III.

And this was one of my local theaters, and I never felt in any particular danger or undue concern.

Growing up in Malverne, we saw so many flicks there. Raiders, Romancing the Stone, War Games, Karate Kid….endless. Totally remember the riot there. Been a long time since Iv'e been back. I take it they have been building some for modern theaters in the general area as the old ones – this, RKO Rockville Center, GA Twin have all closed?

Yes, those theaters are all gone, but Regal last year tore down their old Lynbrook theater and built a new 13 screen multiplex at the same location. The five-screen Fantasy in Rockville Centre is an AMC house and is still up and running but is a little worn around the edges… The Malverne theater is five screen operation and shows a mix of mainstream and independent features.

Redstone originally intended to split the two center screens at some point, the had entrances to both sides in the back already in place. The other two they split later on, they had to create a small hallway behind the back of the auditorium.

IDolby Stereo was first installed in theatres 1, 8, 9 and 10. The rest got them in the new millenium.

Prior to 1985, they had four different ticket stations to buy tickets, you had to look to see where your film was to buy a ticket. After the fall of 1985, they installed computerized ticketing which they were to downsize the boxoffice staff.

The theatre had one main refreshment stand, which in the late 1980s on busy days, it was at least a 10 minute wait to buy refreshments. They never had enough workers. They very rarely open the auxiliary stand on the right hallway.

From 1980 to 1986 went to this location a lot, then after that started to cut down going there because of the crowds and short staff.

Saw The Last Emperor in theatre 11, it was sold out and the screen was like watching a big screen television. The sound was MONO. This was a film that should of been shown in 70MM or at least in one of the large auditoriums.