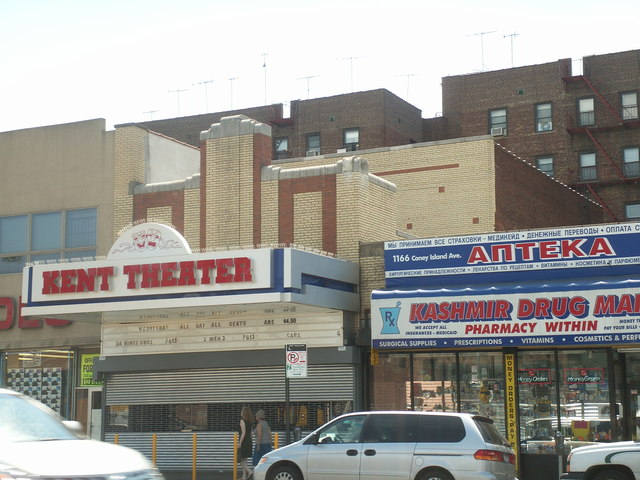 A small neighborhood house that for years showed second run and double features. The 570-seat Kent Theater was opened in 1939. It’s the theater used in the Woody Allen movie “The Purple Rose of Cairo”. In 1986 it reopened as a first run twin, it became a small triplex in March 1991. It has survived many of the other closings in the area like the Kingsway Theatre.

And in those days most theatres had smokeing sections like in the last 5 rows so the aroma of a lit spliff always filled the air at the kent.Nothing like a good spliff and an bud while watching those b films back then.

LIVE FROM THE KENT:

From the wnet.org website concernig the new Woody Allen documentary:

Mia Farrow plays a Depression-era waitress who’s mad about the movies in The Purple Rose of Cairo (1985). While the film takes place in New Jersey, the theater where Cecilia (Farrow) sees the madcap comedy The Purple Rose of Comedy over and over again is named after The Jewel movie house in Brooklyn — one of the first movie houses in Allen’s Brooklyn neighborhood to show foreign films. The theater scenes were actually filmed in the Kent Theatre on Coney Island Avenue in Flatbush, still operating today.

I didn’t know that about “Purple Rose of Cairo”. Thanks for the info. The Kent was one of 2 I went to as a kid growing up in the neighborhood. It’s good to see it’s still open unlike the Midwood Theater. Too bad about that one.

I went here for the first time with a friend. Wednesday’s are Bargain Day (All Seats $5.) all day. School was out and the inner lobby was full of young folks for “SpongeBob”. The theatre lobby retains the poste cases (6) and seats for people awaiting entrance (Nice touch as most don’t). Some details remain intact, but the lobby resembles an arcade with a table to play air hockey which is annoying to people in the small 75 seat theatre (where we sat watching “50 Shades Of Grey”. On the way out I viewed the other two screens which were a bit larger but away from the noise of the lobby. The bathrooms were clean for such a busy matinee. The popcorn was good and I bought a can of soda at the stand. The staff was cordial and polite. This theatre is an excellent bargain as Brooklyn is at a loss for neighborhood theatres. For a 76 year old building it serves its' purpose. Digital projection and seats were fine. I suggest late afternoon shows when schools are out. For $5. there are no complaints as today’s movies are not worth more than $5. The theatre is not to far from my home and I will visit it again. You can keep your modern multiplexes. Remember, It’s a good time for a “Kent” on a Wednesday. (Forgive the cigarette pun!)

Uploaded a b&w photo from 1967 from the Forgotten New York site as well as an evening photo with the old marquee.

Theatre seats in Theatre 1 240 Theatre 2 130 Theatre 3 75 They all run REALD 3D and usually show them all day compared to the big chains Limiting the showtimes.

They have a Dolby Digital sign next to Theatre 1. Lastly, theatre still uses the old tickets from the days of the 70’s but you could purchase tickets online at Fandango

Trailer for “The Purple Rose Of Cairo” below, with interior shots of the Kent Theatre. The theatre facade in the film was built in a vacant lot in Piermont NY, per Lou Lumenick of the New York Post in 2009.