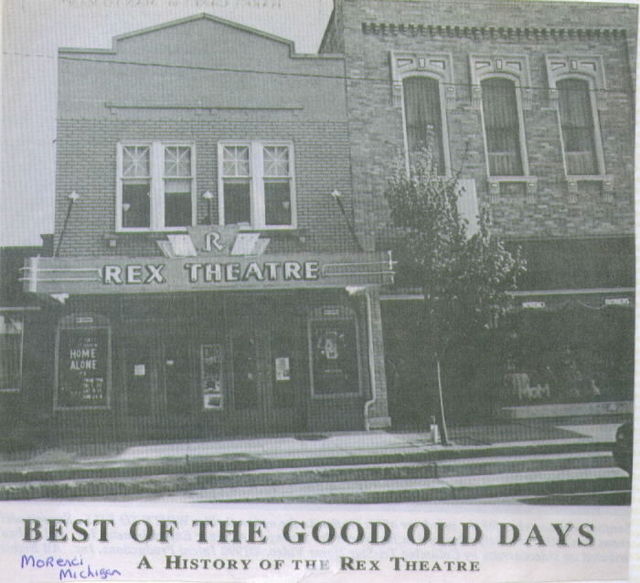 The Gem Theatre was listed in the 1914-1915 edition of American Motion Picture Directory. It was a venue for both vaudeville and the movies. By 1934 it had been renamed Rex Theatre and it was still open in 1957. The Rex Theatre was vacant for years until THSA member Evan Chase bought the theatre and restored it. A theatre organ was installed at that time.

My family owned the Rex Theatre from 1982 to 1995 and showed Spanish language movies. My Mom & Dad put in new seats and a movie screen and operated during the weekends. I specially loved the old fashioned popcorn machine and the brass railings. Too bad the cable and videos caused my family to sell it. Thanks for bringing up some good memories.

Must be closed. Phone number above goes to a college, other phone numbers are disconnected. No activity on their Facebook page either.

As of 2022 the REX THEATRE is now operating and was cleaned up and repaired by its new owner, local firefighter and EMT Tim Newsom. He is showing movies of the last 10-25 years on Saturday and Sunday evenings. There is an active Facebook page: The Historical Rex Theater.

The Gem was wired with a Western Electric sound system in late 1930, as noted in the January 4, 1931 issue of Film Daily:

“Morenci, Mich.— Western Electric sound equipment has been installed in the Gem here owned by E. Furman. This town is the second smallest in the state reported to be using Western Electric equipment, Saugautuct taking first honors in this respect. Saugautuct has a population of 526.”