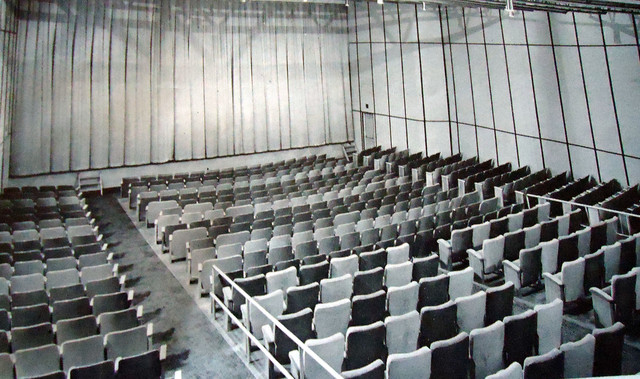 Opened December 29, 1960 by Associated Prudential Theaters Inc. This was a free standing theatre with an all glass lobby, very early-1960’s. It was a first run 70mm house and also played many adult themed movies. Later operated by United Artists, it was closed in 1988.

There is currently a car dealership on the site.

Correction on the opening date: The Boxoffice item says it was opened on Christmas Night, not Christmas Eve, so that’s an opening date of December 25, 1960.

The photos in Boxoffice show that the auditorium was too small to have held 850 seats. The 600 seats cited in the article is probably the correct number. It was only a two-aisle theater (if you don’t count the dead-end center aisle which served only the loge smoking section), and it had only a few more than 20 rows.

I was mgr there ‘81…showed horrible films…leftovers from the Sunrise Mall… I left and Harrison Ford saved the day with Raiders of the Lost Ark…showing that the theatre could do the business..nice place to work

Anyone remember when the Pequa showed “A Hard Day’s Night”? There was a huge crowd waiting. My dad had dropped my sisters and I off to go see it. Then they announced the theater was filled. Some people went nuts and there was a mini riot. Some glass was broken. Luckily my dad had waited around. We came back for the 6 or 6:30 show and there was hardly anyone there.

Many of the components of design of the Pequa were also at the Mid-Island:the exposed ceiling joists, the railed loge section, two story lobby. I seem to remember reading that the number of people at the final showing was something like 180.

I worked the Pequa a few times.It was fun to work there,the spiral stairs led to the booth,and another door led to several seats to the right of the booth for employees to watch.It was fun to open/close the curtains,it was the only theatre I got to do that in. It ran both 35 and 70mm movies.Steve Napoli was there for a while,when it closed he went to Sunrise Mall.The last movie I ran there was Rambo III.I knew two managers, Barbara,and Jackie,both good people.

Worked at the Pequa for manager Lisa Shubin briefly in 1981. Raiders of the Lost ark played most of that year. Oh my god, I remember someone changed the marquee to get back at the previous manager….Something like…“Denise sells used popcorn buckets.” What a riot. A really cool theater. Saw “Midway” an “Rollercoaster” there in Sensurround., and had a private showing of “The Car.” when no one else showed up one saturday afternoon.

A lot of the modernity described was also incorporated in Prudential’s Mid Island Theatre in Bethpage albeit with a more box like facade.

I saw “Ghost Busters"it is still a classic.I liked the 1960’s architecture of the theater,it had a nice lay out.I don’t think all the best theater designs were only at the beginning of the 20th century.I think it’s a car dealer now.

Hello, robboehm,On the photo page of the Pequa theater ate two good examples of theater seats. If you look closely (on a home computer) in the front center half of the seating there are some wider seats mixed in between the mostly regular sized seats. This is what I was talking about; the seats at the Big “A” Amityville theater are the same type.