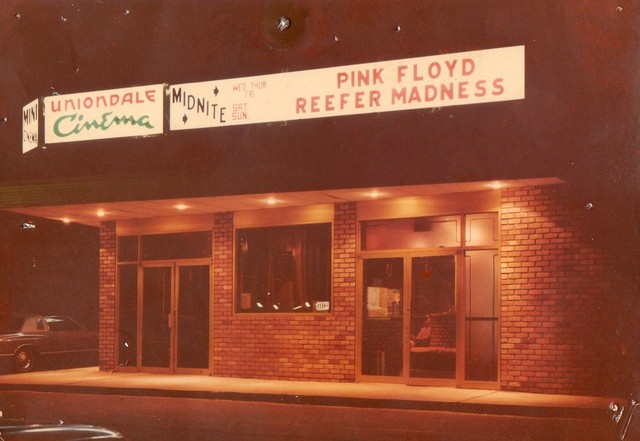 The Uniondale Mini Cinema was opened July 24, 1970 with Clint Eastwood in “Two Mules for Sister Sara”. This was Long Island’s answer to the 8th Street Playhouse in central Manhattan. They played revivals and midnight shows. “The Rocky Horror Picture Show” also started at this theatre. The Uniondale Mini Cinema was closed on September 14, 1981. The former theatre now houses a church.

I was a musician with a day job at B&H Instrument. We made the Christy Electric 35mm projector. All the new machines got their checkout in the booth at the Mini. I remember watching Rocky Horror and many other classics. Great Memories!

I worked there, hell, lived there practically for about 3 years. Always wondered what ever happened to my coworker buddies Jeff (mgr-cough cough)and his wonder dog (our mascot),Donna, Kevin, Heidi, Josh, Michael(the tall frizzy haired jewish one- NOT O’D – thats me), Spyder, and Dennis who was the mgr before Jeff H.

They were some killer times. And whoever made the comment bout lightin up in the house, yeah. We had to stop it sometimes. Th NCPD were making a heavy presence toward the end of my time there (i quit when I stupidly got married. DUH!) But the way we usually handled it was when cops’d show their badges to get in, we’d buzz Tom the full time projectionist so he’d wait for a flashlight signal from in front of the screen, where he’d stop the film, bring up the lights so that we could make the speech,“ Ladies and gentleman, if you’re burning something illegal, please put it out! There are badges in the audience and no one wants to go to jail. Thank you”. Whereby Tom would restart, the audience would cheer, the PD would get pissed off and leave, and the staff would go back to drinkin Heinekin. We had zero probs with partyin as long as there weren’t needles involved. Liquor, beer, and wine were also welcome.

After the last shows(towards the end there were always midnite shows, tho earlier on it was only Fri and Sat nites), we used to lock up, crank up the stereo (we had 2 voice of the theater altecs up front, and 2- i think they were epi- sound towers in the rear, which two rows of seats were removed for in ‘74 or '75. A LOT of power for basically a large projection room!), and walk all the rows scouring for dropped goodies, AND THERE WERE A LOT OF DROPPED GOODIES!!! All kinds of alcohol, weed, blotter, mesc, peyote, psilocybin, uppers, downers, screamers, and laughers. Amazin we ever made it outa there sometimes. Actually, sometimes we’d find things gift wrapped- true!– so hard sayin things were dropped all the time. WLIR jox used to come by a lot, and we’d sometimes go to their studios where much incoherance occurred after 2am. Good collaborations. oh yeah. Hey DeBella- I did snag that mic! Lol.

Sounds like there were maxi times at the mini cinema.

THIS THEATER WAS THE GREATEST SUB POP CULTURE MOVIE HOUSE ON LONG ISLAND EVER! THEY SHOWED CONCERT FILMS,CULT MOVIES AND SOME CLASSICS.FROM THE MARX BROTHERS TO CULT MOVIES LIKE"THE HARDER THEY COME" with JIMMY CLIFF TO JIMMIE HENDRIX CONCERT MOVIES and MORE!

This tiny theater was one of the greatest theaters on the planet Earth!

Article about this cinema 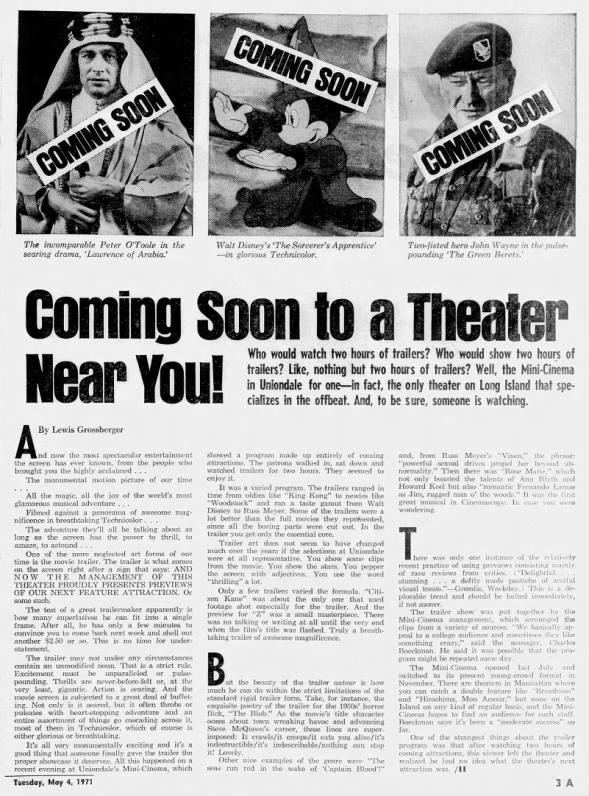 It closed on September 14th, 1981 after a dispute with the Nassau County Library that wanted the land. 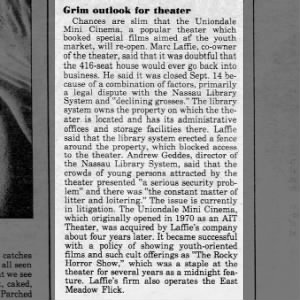