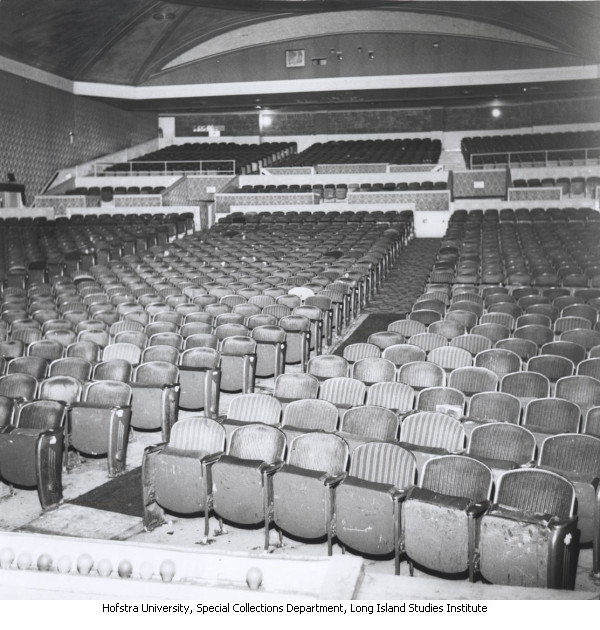 With Eugene DeRosa as architect, the Hempstead Theatre was the first “deluxe” theatre to be built in the rapidly growing Nassau County city of Hempstead, Long Island. Salvatore Calderone already ran the Strand Theatre, which he bought from its original owners, but it was too small and antiquated for his planned policy of first-run movies and vaudeville.

The Hempstead Theatre opened on April 29, 1922, and was an instant success. The profits enabled Calderone to start a circuit of theatres that expanded beyond Hempstead to Westbury, Lynbrook, Valley Stream, Mineola, and Glen Cove. After Calderone’s death, his family turned the management of the Hempstead Theatre and most of the other theatres over to the Skouras Theaters Corp. circuit.

The Hempstead Theatre was eventually sold and converted into the local branch of the N.Y. State Department of Motor Vehicles. The DMV moved out in the late-1990’s and a church took over the building.

I worked as an usher at them Hempstead for a couple of years a teenager in the early 70’s. Many memories. It was an impressive structure, though falling apart by the time I got there. There was an old dressing room in the basement with a long row of mirrors, as if for the chorus people Upstairs, on either side of the stage, there were spiral staircases that had private dressing rooms off them, for the headliners, I suppose. During my tenure, the theatre went through several incarnations: black exploitation films, second run films, even a brief (but memorable) porn period. One summer day, the manager went out for a while and stupidly left me in charge. After a while, a patron came out from the theater to say it was smokey inside. Indeed it was: a fire in the basement! I went through the basement to explore (like I said, stupid) and only got far enough to close the fire doors on my way back out. Then I called the fire department. By this time, the smoke in the theater was thick, but the patrons stuck to their seats. I ran up to the projectionist, who had no idea what was happening (he was so old—so it seemed to me—that he probably couldn’t see much anyway) and told him to tun off the film. Then I ran down to the stage and announced that if they would please follow me to the lobby, I’d give everyone a free pass. The fire department had things under control quickly: the fire was from the belts on the air conditioner compressor. No big deal, really. I’ll never forget how people stayed in their seats, even though it was becoming difficult to see the screen. Must have been a porn film with a really excellent sound track.

Warren could you also access the photo from the Long Island Memories site that has the sign stating on this site will be constructed the Hemptead Theatre. I came upon it just a few moments ago.

When I did an advanced search on Hemstead Theatre there were only seven hits. Number 5 shows the theatre with the policemen already available, the preceeding one is entitled Fulton Avenue. The text mentions the sign on the building. This maybe too tricky to enlarge enough to actually see the sign and not worth the effort.

True, but it adds to the picture of in the day.

It would be interesting to know if any of the interior decor of the theatre remains now that it’s become a church. DMV left the ceiling in tact, I know.

View of proscenium and house from rear of loge

View of house from stage

Alt view of house from stage

Click on the images to zoom in and click on thumbnail image to move “red box” and change area of detail viewed in the larger image.

Ed, notice the seating pattern with the raised, stadium portion? Per our discussion of the Westbury.

I did indeed notice that, rvb.

Here’s an image of the block where the Hempstead Theatre would eventually rise. In fact, according to the notes under this photo, there is a sign on the 2nd building from the left that announces the theatre to be built on that site. Unfortunately, you can’t zoom in on this image to see it for yourself.

Here’s another pic showing the theatre’s entrance and part of the canopy as it appeared in 1931/32. The data provided by the Hempstead Library on this photo dates it circa 1932. The title featured on the marquee opened in the USA on August 22, 1931, according to IMDB.COM.

These images were posted here earlier, but the links are no longer working.

The Hempstead Theatre was built by the Rivoli Theatre Corporation. An ad offering stock in the company appeared in the February 10, 1921, issue of The Hempstead Sentinel (PDF here.) An item in the April 28, 1921, issue of Engineering News-Record revealed that the architects Reilly & Hall were originally connected with the project:

Although I’ve been unable to find any period source noting a change in architects from Reilly & Hall to Eugene DeRosa, neither have I found any later items mentioning Reilly & Hall in connection with the project, so it’s quite possible that either the owners (or Reilly & Hall themselves, if they were too busy) did hire DeRosa to do the final design.