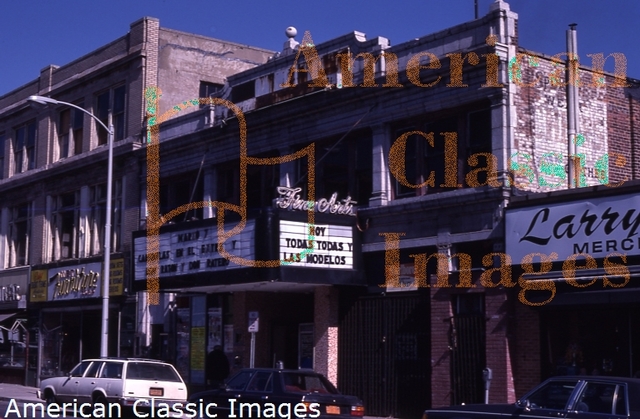 This theater, originally the State Theater, was located on Main Street in Hempstead, Long Island. It was a 1927 conversion of a former car dealership. It had a square overhanging marquee, and showed primarily cult films. I heard that this theater showed Westerns in the 1940’s and 1950’s, but in the late-1950’s and early-1960’s, it was showing Russ Meyer type films. It may have been related to a smaller theater in Uniondale, LI, NY, the next town to the south. I believe this theater ceased operations in the 1970’s, but cannot be sure.

It was in downtown Hempstead, in the middle of the block and had an adult joke store next to it. It was a busy shopping area with many independent merchants and stores surrounding the theater.

If anyone is really interested in reading about this theater, three of the projectionists who worked it where interviewed in this magazine: http://www.cinefear.com/journal.html . It was Volume 3 #1. The issue with the orange cover. That same interview was reproduced in a book called Cinema Sewer, which you can get off Amazon…

Even before it was the State or the Fine Arts, this was the site of the Fulton Theatre. Long Island Memories has a picture of the boarded up Fulton saying that on this site was to be erected a 500 seat movie theatre.

Referring to the June 8, 2008 post, you can see the Nassau Garage sign in the map view, although it’s not visible in the 1986 photo. Both buildings have that little knob on the top, though.
http://tinyurl.com/y8vnrme

Ken mc… the two buildings (the current google map streetview image with the Nassau Garage inscription and the 1986 image of the FIne Arts that Robert R posted) are definitely one and the same. The theatre must have opened as a conversion of the original auto dealership.

Here’s a photo of the Nassau Garage building as it originally looked circa 1910. The address noted by the Hempstead Library for this photo is 78 Main Street. There’s no question that this is the same building as the Fine Arts building from the 1986 photo. That fact is particularly evident in studying the current google map image and comparing it to the ‘86 shot. Given that it’s a double lot, it is possible that the building covers the addresses 78 and 80 Main Street.

Here is a photo looking up Main Street from Fulton Ave, dated March 1, 1973, in which you can see the illuminated marquee of the Fine Arts in the background, down the block.

And here is the incongruous image mentioned above by rvb that depicts the “Old Fulton Theatre,” described as being on the east side of Main Street just north of Fulton, and with the sign saying that a modern 500 seat theatre was to be erected on the site. That just doesn’t wash with the Nassau Garage history noted above. Curious as to what the true story of these theaters is. Could the “Old Fulton” have been located at a different location on the block? And is it possible that the new theatre was not erected on that same parcel, but rather carved out of the Nassau Garage space due to some long-forgotten economic or logistical reasons? We may never know…

Photos of Fine Arts marquee and Nassau Garage in 1910, the building from which the theater was crafted, linked via comments now in photo section. Links tend to be broken in time.

An ad in the November 29, 1922, issue of Freeport’s The Daily Review gives 78-80 Main Street as the address of Forman-Hutcheson Corporation, dealers in Packard and Oakland automobiles (PDF.) The August 22, 1927, issue of The Nassau Daily Review made reference to the new State Theatre “…now under construction at Main street in the Forman-Hutchinson [sic] building….” By 1928 Foreman-Hutcheson was advertising its location as 84 Main Street, so it had moved next door. This photo from December, 1926, shows their new building under construction next door to the original showroom and garage that later became the State Theatre.

The Fulton Theatre at Fulton and Main Streets is advertised in the April 24, 1923, issue of the Hempstead Sentinal, but without a street number. As 78-80 Main was then still occupied by Foreman-Hutcheson, the Fulton had to have been an earlier theater than the State. An ad for the Fulton Theatre in 1912 says that the house would be showing Sara Bernhardt’s movie Queen Elizabeth on October 31, so this was probably the theater built around 1910 on the site shown in the “incongruous image” Ed Solero linked to.

The State Theatre built in 1927 was a different house than the Fulton Theatre, which was located farther south.

I just added some Newsday articles and Ads featuring the Fine Arts. Special thanks to my librarian wife for digging these out for me.